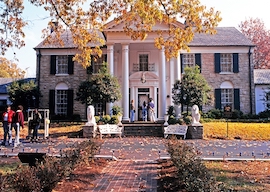 CHARLOTTE, N.C.—The lawyers and CPAs who run Elvis Presley Enterprises have been threatening the city of Memphis for the past two years with plans to dismantle Graceland—the most hallowed redneck house in the world—and move it to another continent.

They mean this quite literally. They have offers on the table, they say, to bring in redneck historians and lovingly peel up the green shag carpet from the Jungle Room—where Elvis’ last two albums were recorded despite the rushing background noise of the waterfall that spurts out of one wall—and then move all the lacquered wood furniture in the shape of tree stumps to someplace like Dubai, where real estate entrepreneurs like to collect items of Americana and turn them into pop culture museums. It would be sort of like displaying objects from the Titanic if the Titanic had been intentionally sunk in Southampton harbor and then sold off for scrap.

If the heirs of the Elvis empire don’t get their tax breaks, then Dubai is the obvious destination for the pink Cadillac, the white jumpsuits, the gold jewelry, and the two airplanes the King traveled in, namely the Lisa Marie and the Hound Dog II (I have to apologize for my Elvis scholarship—I don’t actually remember what happened to the Hound Dog I), if only because they have lots of space there in the desert and lots of dirhams. The more logical choice, in my opinion, would be Japan, where there are no doubt so many Elvis fetishists that the merchandise sales alone would keep the redneck Elvis heirs in whiskey and recreational vehicles for the rest of recorded time, to say nothing of the wonderment aroused on the streets of Osaka when the whole male population adopted blue suede shoes and monogrammed neck chains.

“A phenomenon like Elvis could only have occurred in the Mississippi Delta of that era.”

According to the claims made before the desperate Memphis bureaucrats—struggling to match the tourist attractions of archrival Nashville, which has the Grand Ole Opry and in my opinion the much more important Tootsie’s Orchid Lounge—there are places all over the world clamoring to become the next Lake Havasu City, Arizona. (That would be the casino-laden desert oasis on the Nevada border where London Bridge was moved in 1967.) Curiously, several members of the royal family and the blue-blood classes of Olde England have made the pilgrimage to Graceland, including, most recently, Prince William and Prince Harry. (A future king looking for pointers from a past king?) But none of them have bothered to gaze at London Bridge in its new location, presumably because they had 135 years to look at it back home. Usually England goes the other way with this stuff, though. How many years has Greece been agitating for the return of the Elgin Marbles from the British Museum? If the Elvis money changers could somehow make a deal with a Brit company, the precious pool tables and slot-car tracks used by Elvis and his posse would be forever beyond the reach of aggrieved Scots-Irish mourners in the American South. Would Parliament honor petitions from a Redneck Congress convened in, say, Chattanooga to reclaim the heritage of the Presbyterian diaspora? I think not.

I have a little expertise in the issues involved here, which include, by the way, the desire of Graceland’s owners to build a manufacturing plant on the Graceland grounds that would turn out Chia Pets and Clappers. For those of you reading this overseas, both Chia Pets and Clappers are essential ornaments in any proper redneck American household, especially if purchased for $19.95 from late-night 800-number commercials. The Chia Pet is a terra-cotta figurine, usually shaped like an animal, on which green mossy plant material grows to resemble hair or fur. (Yes, there is a specific Elvis Chia Pet.) The Clapper, on the other hand, is a couch-potato device that predates the Internet of Things by several decades, a sound-activated light switch that requires you to clap your hands twice to turn it on, twice again to turn it off, allowing you to watch eleven consecutive episodes of Forensic Files without ever having to get out of bed. The Chia Pet/Clapper factory will supposedly employ a thousand people, a number that would boggle the mind of Ron Popeil, inventor of the Chop-o-Matic food processor.

But as I say, I qualify as an amateur expert on Elvis’ place in world history since I was an actor in a critically trashed 1989 movie called Great Balls of Fire, a Jerry Lee Lewis biopic filmed entirely in Memphis and vicinity. My character was Dewey Phillips, the pioneering radio personality who had a show called Red, Hot and Blue on WHBQ in the 1950s. In my youthful zeal for background research, I sought out every newspaper article, recording, and reminiscence about this disc jockey who had been the first to broadcast an Elvis record. (The song was “That’s All Right,” although he also played the flip side, which was “Blue Moon of Kentucky.”) And what I discovered was that a phenomenon like Elvis could only have occurred in the Mississippi Delta of that era.

Elvis was from Tupelo, Mississippi, 100 miles to the southeast of Graceland, but he would have been immersed in the African-American music that emerged from the Baptist churches and blues honky-tonks ranged up and down the Mississippi River between St. Louis and New Orleans. Dewey Phillips broadcast that music on Red, Hot and Blue, sometimes even highlighting actual church choirs, but in Memphis the blues and gospel music of black folk ran smack-dab up against all that clog dancing and fiddling that came down through the Appalachian Valley from Scotland, Ulster, and Cumberland. As all Elvis aficionados know, the King was criticized early in his career for singing like a black man, and the term “rock and roll” itself comes straight up out of the slave-based Delta rice fields.

Elvis may not have been black, but his musical DNA was as mixed-race as Alexander Hamilton. Memphis was the place where original black music met original white music. That’s what makes it American, that’s what makes Memphis the Santiago de Compostela of rock and roll, and that’s why you can move Graceland to Nairobi or Edinburgh but you’ll only be telling half the story. If Graceland moves, Graceland dies.