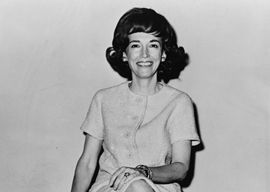 Four years after her death, Helen Gurley Brown”author of the 1962 phenomenon Sex and the Single Girl and longtime Cosmopolitan editor in chief”is having a moment.

Not one but two bulging biographies are now out (to accompany the one released just before she died). HGB obsessive Lena Dunham has optioned them, with a Mad Men-style series in mind. And the sale of Brown’s breathtaking four-story Central Park West penthouse recently made international news due to its price tag (just under $20 million); intact, explosion-on-the-set-of-Dynasty decor; and provenance: The old broad continues to fascinate, beyond the grave.

That HGB inspired a trio of books in short order prompted less successful women writers at The Nation and The New York Review of Books, respectively, to wonder why”using the same catty contempt that led Gurley Brown’s NYT obituarist to snark, “She was 90, though parts of her were considerably younger.”

Tellingly, over 300 comments posted beside that bitchy obit chastised its author and defended its subject as a publishing pioneer and even a feminist heroine, trademark fishnets and all.

While I never acquired Gurley Brown’s nigh-on industrious sexual fluency (she was a veritable Whore-atio Alger), I recognize other striving proles at a great distance, and reflexively cheer them on.

“The old broad continues to fascinate, beyond the grave.”

Ozark-born and acned, flat-chested and fatherless, Brown never stopped calling herself a “mouseburger” and a “hillbilly.” Ambitious individuals of limited means often use such exaggerations to spur themselves to success, the way athletes use steroids. In HGB’s case, the plain-Jane “bole” wasn”t that “hyper”: One biography is bluntly titled Not Pretty Enough; another, Enter Helen“my husband glanced at the cover and said, “No, thanks.”

Through the 1940s and “50s, the degree-free Gurley hoisted herself up a ladder of menial clerical jobs to become the highest-paid female copywriter on the West Coast.

She also slept with a still-shocking number of men (173!) but nevertheless married exceedingly well (her husband went on to produce Jaws and The Sting) and for life, at age 37.

Now: I don”t remember a time when I didn”t want to “get the hell out of my childhood,” to steal from one of Brown’s huffier analyzers. While other girls fantasized about their weddings, I obsessed over my future big-city apartment, rearranging its layout, color scheme, and furnishings in my imagination.

I also realized blessedly early that I”d never score so much as a free drink off my looks, so I cultivated a stoic work ethic. As the first person in my family to finish high school (and later, to earn a five-figure salary), I scrounged obsessively for role models among total strangers and even fictional characters.

Yet I never consciously read a word of Brown’s (and there are millions of them) until after her death. (Unavoidable at cash-register checkouts in over 100 countries, those excitable Cosmo cover cutlines don”t count: They were always written by her husband.)

It’s a testament to Brown’s cultural influence that I nevertheless absorbed her worldview: Work first, last, and forever; the Single Girl’s Apartment is her castle; don”t marry too young, if at all; career women probably shouldn”t have kids. She called one of her books Having It All, helping popularize that fatal phrase, but for the childless Helen (and me), “all” was simply synonymous with “your own way,” and if that meant no offspring, so be it.

Her body of work is really one big midcentury “conduct book“ of now-familiar and pragmatic”even “puritanical“”financial, employment, and relationship advice, not all of it silly or dated.

In fact, it’s her biographers who look out of touch when they fall over themselves to condemn Gurley Brown’s accurate-after-all insistence that white Western women didn”t have to worry about AIDS.