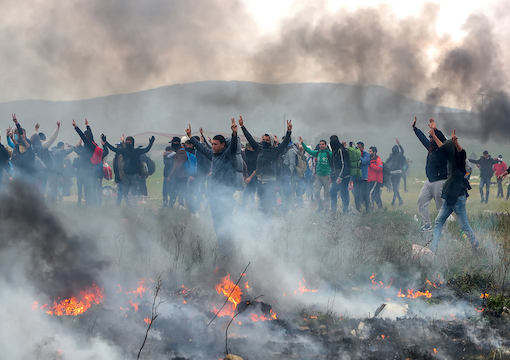 Greece, with roughly the same population as Switzerland, and under siege by migrants turned loose by the dreaded Turks, has handled the crisis well. Unlike the American media that is using the virus crisis in order to attack Trump, the Greek people will not tolerate such craven opportunism and dishonesty. Criticism of the government is almost nonexistent, as the suddenly wise populace is united against the unseen menace. God knows poor Greece has had enough thunderbolts aimed at her, starting ten years ago with the eurozone’s incompatible economic demands. I remember well writing an article pleading with the then prime minister, an arrogant euro asslicker by the name of Samaras, to return to a devalued drachma and not sacrifice the savings and welfare of millions in order to have motorcycle escorts while entering Brussels. Like all craven cowards he chose the motorcycles.

Louis de Bernières recently wrote in The Telegraph something that touched me about my birthplace: He ran into Lord Owen and the ex–foreign minister told him that he had become a Leaver because of what had been done to Greece. (David Owen has a summer house in the Peloponnese.) The country that was reduced to penury by Brussels was the only country that stood beside Britain in 1940 and managed to humiliate Mussolini’s troops and drive them back into Albania. While this was going on, Belgium, Holland, and France had obliged the Wehrmacht and had folded like a cheap accordion. Not us Greeks, and my mother had five brothers (all Spartans) at the front during the first week of the war. What made Metaxas and King George and all the Greeks defy the Axis? (The Italians had only asked for free access to the Middle East.) After all, they had nothing to gain, and the combined Axis forces meant certain defeat. I suppose it was pride of our heroic past, and battles like Thermopylae and Marathon, that fired up the nation.

“Hamlet would have fit right in with this bunch.”

The reports coming out of Greece nowadays are always about the migrant crisis, one caused by the neocons in Washington and the “slam dunk” victory of that half-wit George W. Bush, aided and abetted by honest Tony Blair. Now fake news of violent local reactions to the migrant invasion command foreign coverage. The crisis began five years ago and continues unabated. It has wrung every drop of generosity from a people that pride themselves on their compassion. It has turned some beautiful islands and some parts of Athens into concentration-camp-like conditions. And all this time no one from Brussels dares say a word to the Turks, or to the Americans, who are, after all, the ones responsible for a war that began in 2003 and continues to fester to this day.

The overflow of migrants and the possible breakout of the virus in the overcrowded camps have no resolution in sight. Turkey has become the official trafficker of migrants, while the sultans in Brussels dither and meet and dither some more and schedule more meetings. Hamlet would have fit right in with this bunch. In the meantime the public has become outraged at the lack of action by those responsible. Some are even blaming international aid workers for guiding the migrants toward the islands, although there is no proof of this. I wouldn’t put it past them. They did it to the Italians, so why not to the Hellenes?

Never mind. Everyone seems to have turned Turkish of late. Gotcha journalism reigns supreme in the land of the depraved, where a virus that came from bats—served as a delicacy in a disgusting Chinese food market—is now used as an excuse by the media to discredit Donald Trump. In the Bagel, virus sufferers in overflowing hospitals have spit and cursed and threatened nurses, a news item that somehow escaped the notice of The New York Times because those threatening were the wrong color. These savages are doing what comes naturally: threaten, intimidate, and force their way to the front of the line. No one dares name them because it’s not woke. Somebody dared call it diversity gone mad, but one thing is for sure: Once this plague is over, national barriers might make a comeback, and not be seen only as an impediment to human freedom. A borderless world may be the dream of rich subversives like the ghastly George Soros, but something good always emerges after a catastrophe: like never trusting the Chinese and outlawing the word “globalist.”