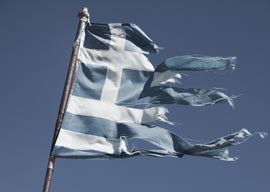 There’s nothing to add about the clowns in Brussels and Athens but a Yogi Berra pearl, “It ain’t over till it’s over.” The Greek drama will go on and on until the brinkmanship is exhausted. My guess is the EU will blink, and I write this early, a day before the “final” decision is taken in Brussels on Friday, June 5. Although Greek accounting arabesques have been known to shame the Bolshoi—Goldman Sachs taught the modern Hellenes how to cook the books and screw Brussels, something we are now paying the price for—we Greeks have contributed a few things in addition to cheating and not paying our taxes. We divined architecture in the human body and the proportions of humanity in their architecture. That singular creative explosion of the 5th and 4th centuries BC has never been equaled. The modern Italians, ashamed of their Roman copycat ancestors, suggest that the ancient Greeks even discovered sex, but it took the Romans to include women. Boo! I guess Pericles has to be the greatest statesman-leader ever, his idealistic patriotism free from all sordid and selfish motives. (Just look at the Clintons and start weeping.) Cimon of Athens, Miltiades, Themistocles, Phidias, Praxiteles, Socrates, Plato, Aristides, Sophocles, Aeschylus, Euripides, Aristophanes, Plutarch, Thucydides, Hippocrates, (Taki?)—you name them, we had them.

“Putting Greece on a sound footing is like cleaning out the Augean stables, with one difference. The stables were cleaned by Hercules, but we have a midget at the helm.”

Okay, okay, I know, it was all in the past. (Even Taki.) Except that we are the only small Western European nation to win two Nobel Prizes in Literature, with Seferis in 1963 and Elytis in 1979. We were the last European country to stage a military coup and overthrow a quasi-democratic government in 1967, and the last European country to abolish a monarchy after an extremely dubious referendum overseen by the most undemocratic peasant–prime minister, Constantine Karamanlis, the most ungrateful politician who has ever existed, and that’s saying something. (Had the king been allowed to continue reigning, he would have put a stop to the looting practiced by the Papandreou-Karamanlis gang, and Greece would not be today in the shithouse.) We are also the smallest European country to win the European Cup, in 2004—with a German coach, needless to say. We are also the country that just might bring down the whole shameful quasi-dictatorship of the EU, something I fervently pray for, but the Germans ain’t what they used to be. They will blink and blink hard.

The latest Greek government reminds me a lot of Netanyahu and Likud. They both yell wolf when not even a mouse is around. Bibi’s alarmist rhetoric has been a staple of his career. Since 1996 he’s been strutting in front of the American Congress, getting standing ovations while he warns Uncle Sam that Iran is building a formidable arsenal of ballistic missiles that will soon have Manhattan in their reach. In the meantime he keeps building on Palestinian lands, depriving those poor souls of the little water they’ve been left, and slowly strangling their economy. The Greeks are using confrontational tactics and refusing to propose specific steps that they would take in exchange for the final bailout. Just because such tactics work in the bazaar doesn’t mean they work among serious diplomatic discussions. That ghastly finance minister, Yanis Varoufakis, is to diplomacy what Queen Elizabeth is to kickboxing. Israel’s own spies admit that Iran is no threat and won’t be for longer than 10 years if allowed to build a bomb. The present Greek opposition admits that mistakes have been made, but they are being made to look like Pericles when compared with the Syriza mob.