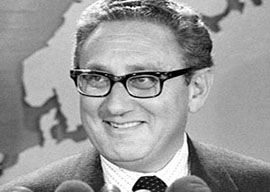 Henry Kissinger should emulate Old Marley’s ghost, which “floated out upon the bleak, dark night” from the chambers of Mr. Ebenezer Scrooge. It was a gentle, necessary departure from our world that allowed Scrooge to confront his past and contemplate his future. Although Kissinger remains alive, if that is the right word, at the age of 87, the ghosts of his past crimes resurface from the depths to haunt him and us. Crippled Tiny Tims from East Timor, Cambodia, Laos, Vietnam and Chile deserve a rest from the “first statesman at State since Jefferson,” as the press called him after Richard Nixon anointed him secretary of state in 1973.

The thing that could be always said in Kissinger’s favor, apart from the fact he kept American troops out of Ireland, was that he had nothing to do with the Nazi Holocaust of Jews in mid-century. But now an old tape of a conversation has surfaced, and he might as well have lent his signature to the genocide of his fellow Jews just as he did with the genocide of his non-fellow East Timorese. This is Kissinger’s statement to Richard Nixon in the White House on March 1, 1973, recently released by the Nixon Presidential Library:”¨

It caused a stir, with many of Kissinger’s old dinner-party friends such as Abe Foxman and Mort Zuckerman”who would normally pounce on any such callous and obviously anti-Semitic statement”attempting to sanitize Henry’s unsanitary aside. Kissinger’s own defense is even more absurd, referring to “quotations ascribed to me in the transcript….” Ascribed? The deep, guttural tones on the tape are undeniably his.

Kissinger’s role was more than theoretical in the genocide that took place in East Timor after he approved its invasion by Indonesia. On December 6, 1975, Kissinger and Gerald Ford met President Suharto in Indonesia and promised to increase arms supplies to sustain Indonesian suppression of the former Portuguese colony. Kissinger, quoted verbatim in US Embassy cables of that war council, insisted that American weapons for the Indonesian Army’s invasion could be finessed: “It depends on how we construe it; whether it is in self-defense or is a foreign operation.”

“This is a true American tale of the immigrant made good, albeit on a grander scale than Sicilian-American Alphonse Capone.”

Since no one in East Timor had attacked or intended to attack Indonesia, Suharto could hardly plead self-defense. But Kissinger would make the case for him. All he asked was that Suharto delay the invasion a few hours until he and Ford had left Jakarta. He presumably relied on the American public’s inability to connect the Jakarta conference with the invasion so long as he and Ford were back in Washington when the killing began. As far as the American media went, he was right. The Indonesian Army invaded on the anniversary of a previous day of infamy, December 7, massacring about a third of the population. The press, apart from five Australian journalists whom the Indonesian Army slaughtered, ignored the invasion and subsequent occupation. Well done, Henry.

By the time Suharto was overthrown in 1998, Kissinger had gone private”charging vast fees to advise people like Suharto on methods for marketing their crimes. He also kept posing as an elder statesman whose views were sought (and often paid for) by a media that enabled his penchant for self-publicity. He was a patriot whose love of country stopped short of taking part in the 9/11 Commission if it meant disclosing how much the Saudi royal family paid him for his counsel. This is a true American tale of the immigrant made good, albeit on a grander scale than Sicilian-American Alphonse Capone.