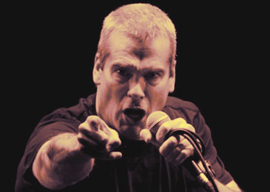 In a recent interview you expressed concern, like so many of our other socially conscious celebrities, that the so-called “War on Women” was slowing the wheels of progressive permissiveness. It caused me to reflect on why I’m no longer much of a fan. I thought it might be cathartic for us both if I explored the subject in the form of an open letter, something like the one you once penned to Ann Coulter (not that I don’t think she’s a shrieking harpy myself). Since you share your angst with others on stages all across the world while clad only in a pair of skimpy shorts, I figure you”ll have no qualms about this.

Your career started inauspiciously. A number of great punk bands emerged in the early 80s, but Black Flag was not one of them (cool logo, though). Frankly, Henry, the band was at its best when you weren’t singing.

Still, it was during that otherwise forgettable decade that you began to forge something of a unique and compelling persona, committing yourself to physical fitness and acquiring a number of distinctive tattoos, many of them atrocious.

“At this point you have a lot more in common with Tori Spelling than you do with Sid Vicious.”

I liked you much better in your 90s phase. You had by then come into your own as a kind of countercultural “renaissance man.” There were books, music (often lackluster), spoken-word performances, and movie roles (mostly bad). But what you lacked in consistency and talent, you made up for with prodigious output and an unparalleled intensity.

It was this intensity that made you a source of fascination for many. It set you apart from your fellow rock stars whom you rightly chided for being weak in both body and mind. As embarrassing as it now seems, I found much of what you wrote back then inspiring. You implored us to “Not be like your parents. To not be like your friends. To be yourself. To cut yourself out of stone” and to “Keep your blood clean, your bodies lean, and your minds sharp.” Heady stuff for impressionable youths.

And you walked the walk, Henry, not allowing success to go to your head or up your nose like so many other “artists.” At the 1995 Grammys you performed in a tuxedo”but barefoot. Even Madonna observed that you’d never forgotten your roots. You were the antithesis of the rock star, the anti-Bret Michaels. You were somebody, Henry, because you were yourself.

But you’ve changed. Henry Rollins, you’ve sold out. Looking back now, there were signs of trouble. When you started being seen publicly with that loathsome loudmouth Janeane Garofalo (”the Tea Party is racist”), it was already too late.