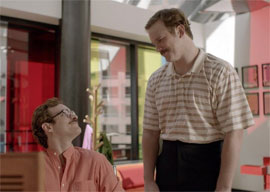 When writer-director Spike Jonze won a Best Screenplay Golden Globe this week for Her, his little science-fiction fable about Joaquin Phoenix falling in love with his Siri-like smartphone (voiced by Scarlett Johansson), he apologized for his acceptance speech by noting, “I’m bad at English. And it’s the only language I know.”

That’s overstating his weaknesses as a verbalist, but Her doesn”t shake the assumption that the first two films Jonze directed, Being John Malkovich and Adaptation, were largely the accomplishment of screenwriter Charlie Kaufman. Her, an occasionally comic love story about a virtual girlfriend who turns out to be as high maintenance as most real ones, isn”t a bad movie.

But critics” rapturous response says more about how adroitly Jonze pushed their class marker buttons. For example, the normally intelligent Christopher Orr burbled in The Atlantic:

Why Her Is the Best Film of the Year: Thoughtful, elegant, and moving, Spike Jonze’s film about a man in love with his operating system is a work of sincere and forceful humanism.

One reason Her is so much less popular with viewers than with reviewers is because it is set in a future Los Angeles depicted as a serene, benevolent utopia stripped of everything that English majors have traditionally found tawdry about the real LA: swimming pools, movie stars, and fancy cars. Granted, those are the only things that the rest of the world likes about LA, but tasteful writers have always been irritated that Los Angeles was the Dream Destination of the Uncouth.

“Tasteful writers have always been irritated that Los Angeles was the Dream Destination of the Uncouth.”

Some things about this Los Angeles of the future are much better that [sic] today: Density has replaced sprawl, so everyone lives in high-rises looking out over other high-rises (many of the exteriors were shot in Shanghai), to the thrum of a trancey aural wash of Arcade Fire music. They walk on elevated walkways and ride a subway system and work in rooms in velvety pastels. Poverty and cars seem relics of the past. In Theodore’s underpopulated workplace, everyone is polite and supportive.

This sounds like Toronto’s high-rise suburb of Mississauga. And it looks even worse because Shanghai is blanketed in the kind of smog that hasn”t been seen in Los Angeles in this century.

But downtown living is the kind of thing that literate people enjoy these days. (Recall the surprise success of the 2009 romance 500 Days of Summer with Joseph Gordon-Levitt as an aspiring architect wooing Zooey Deschanel in a gentrifying downtown LA.) Hence, Her looks like it was inspired by a Matthew Yglesias e-book about how we should all live in Blade Runner-sized apartment towers and take magnetic levitation trolleys to work.

Phoenix’s gentle, mustachioed protagonist has the Victorian-sounding name of Theodore Twombly, which sounds like the name of an artisanal pickle company in the hipster part of Brooklyn. In this new, improved Los Angeles, men wear high-waisted wool trousers that Theodore Roosevelt might have thought too retro. It’s all very reminiscent of the second Portlandia theme song about how The Dream of the 1890s is alive in Portland, as if President McKinley had never been assassinated and thus the 20th century had never happened.

Theo has what ought to sound like a crummy job, a futuristic version of Gordon-Levitt’s emasculating position as a greeting-card writer. Theo sits at an open desk at BeautifulHandwrittenLetters.com and composes intimate letters for rich people to send each other on their 50th wedding anniversaries. Keyboards no longer exist, so the ghostwriters dictate all their correspondence in hushed, considerate tones. (In fact, everyone in the entire movie speaks only in their indoor voices.)

But in Her, the lighting, score, and acting are refined and upbeat. Accordingly, it seems (at least while you are watching) as if Theo must have a wonderful job. The office is decorated, literally, with rose-colored glasses. (Large panes of pink-tinted Plexiglas were used to filter out all the depressing blue light.) With his pants hitched up to his armpits, Chris Pratt (the enormous first baseman from Moneyball) plays Theo’s receptionist and/or boss. Whoever he is, he caringly affirms and validates the uniqueness of the emotional insights Theo handcrafts into his bogus letters.

The only thing wrong with Theo’s life is that he has to go home alone to his gigantic, nicely decorated Beverly Hills apartment. His wife”another writer, but from a more rigorously ambitious family”has left him.

Jonze cast Rooney Mara, an offspring of two NFL team-owning dynasties (Art Rooney’s Steelers and Wellington Mara’s Giants), to play the role presumably inspired by Jonze’s ex-wife Sofia Coppola. The daughter of The Godfather auteur separated from Spike in 2003 after making her smash directorial debut with Lost in Translation, starring Scarlett Johansson as the unhappy wife of Giovanni Ribisi’s trend-chasing photographer, a role long rumored to be unkindly modeled upon Jonze.

Still, Theo seems to enjoy having a deep relationship with himself and little interest in anybody or anything other than his own emotions. Thus, he’s the perfect customer for a new AI smartphone operating system that lures him into dependency.

Besides making obscure gestures toward Jonze’s failed marriage, Her seems to ask the broader question: What if the writers of Los Angeles ever win? What if LA were finally reorganized to suit the cultured tastes of its tiny minority of thoughtful and sensitive wordsmiths? What if everybody in Los Angeles stopped aspiring to stardom, mansions in the canyons, and German convertibles, and woke up to the manifest superiority of rail transport, dense walkability, and endlessly analyzed relationships?

The background is that Los Angeles is home to a surprising number of writers. And they probably drive nicer cars on average than authors anywhere else in the world. After all, about 10% of movie industry expenses go to screenwriters (much of it for work that never emerges from development hell), which by the paltry standards of scribblers is a huge sum. LA is thus full of unknown Barton Finks driving E-Class Mercedes whose half-dozen screenplays have been paid for but never produced.

But screenwriters don”t drive cars as nice as the people for whom they write. And those boors exercise enormous power over the artists” fates.