Hercules in the Desert 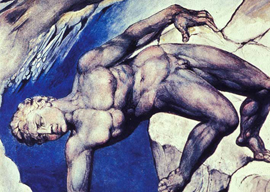 Antaeus was a Libyan giant whose strength appeared invincible. One day he challenged the mighty Hercules to a wrestling match. Each time Antaeus was thrown to the ground, he rose again stronger than before. Hercules realized that his strength came from his mother Gaia, the Earth, so he held the giant aloft until his strength drained away and finally killed him.

Once again battle is joined on Libya’s sands, and the question now is which one is Antaeus and which is Hercules. Whose strength will ultimately drain away and be defeated, and who will triumph? Can Antaeus actually win this time?

Perhaps the more classically educated among our Western leaders”are there any left?”think they are effectively holding Gaddafi aloft and draining him of his strength by imposing their no-fly zone and shooting up armored columns that cross invisible red lines. Possibly they expect their flash of high-tech, rocket-powered Herculean strength to impress these simple desert people and so deprive the Libyan leader of the support he still draws from a considerable portion of them. The West’s desired end game is probably a replay of the Northern Alliance kicking out the Taliban, little realizing, through the welter of intelligence reports, the subtle differences between one end of the Islamic world and the other.

“It seems that in this battle it is the West that is now being held aloft with its strength slowly ebbing away.”

It seems more likely that the Western Hercules has merely succeeded in throwing Antaeus to the ground. The past couple of weeks have shown that the Libyan leader still has plenty of military power and would have soon ended this civil war if the West had sat on its thumbs a little while longer. Despite the splendor of its armaments, the West is constrained in what it can do. Already the US and its cronies look bad for declaring war on Gaddafi on the pretext that he is harming his own people while they ignore similar brutalities carried out by Western allies in Bahrain and Yemen.

To actually employ the firepower required to topple Gaddafi might make this ill-judged intervention look even worse. A few demolished buildings surrounded by wailing civilians or a busload of children blown to smithereens because some in-flight computer decided it resembled a tank could easily drain off the strength the Western giant draws from its public’s half-baked notion that it is merely involved in a bit of Good Samaritan, high-altitude, pinpoint bombing.