Here are the Nutcases Who Believe in ‘Replacement’ 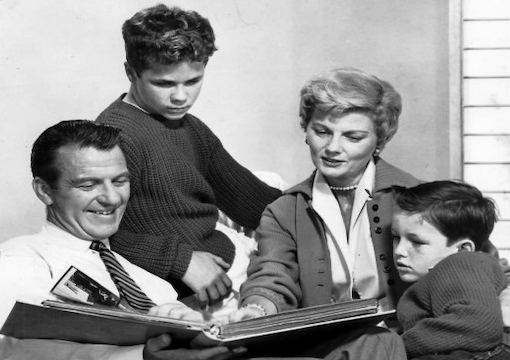 Cleaver Family, Leave it to Beaver

The “Great Replacement Theory” (GRT) has taken the media by storm! It seems that the white racist who shot up a grocery store full of black people last weekend cited GRT in his 180-page “manifesto.”

First of all, journalists need to understand that GRT is only a theory taught in advanced law school seminars. It is not something designed for indoctrination of mass audiences of young people.

So what is GRT? The New York Times describes it thus:

“I don’t know about the Jewish cabal version of GRT, but as for liberals using immigration to bring in more Democratic voters, as Maya Angelou said, “When people show you who they are, believe them.”

“[T]he notion that Western elites, sometimes manipulated by Jews, want to ‘replace’ and disempower white Americans.” (You want a conspiracy theory about a secretive cabal of Jews? Check out the Times‘ series of articles on “neoconservatives” back in the early 2000s.)

But then — just as every argument about abortion suddenly becomes an argument about contraception — a few paragraphs later, the crackpot theory jumps from a Jewish cabal replacing whites with blacks … to the idea that Democrats are using immigration “for electoral gains.”

Wow, that is nuts! Where’d anybody get that idea?

“The 1965 Immigration Reform Act promoted by President Kennedy, drafted by Attorney General Robert Kennedy, and pushed through the Senate by Ted Kennedy has resulted in a wave of immigration from the Third World that should shift the nation in a more liberal direction within a generation. It will go down as the Kennedy family’s greatest gift to the Democratic Party.”

(Well, sure, if you want to totally overlook skirt-chasing and pill-popping.)

Then in 2002, Democrats Ruy Teixeira and John Judis wrote “The Emerging Democratic Majority,” arguing that demographic changes, mostly by immigration, were putting Democrats on a glide path to an insuperable majority. After Obama’s reelection in 2012, Teixeira crowed in The Atlantic (which was then a magazine that people read, as opposed to a billionaire widow’s charity) that “ten years farther down this road,” Obama lost the white vote outright, but won the election with the minority vote — African-Americans (93-6), Hispanics (71-27) and Asian-Americans (73-26).

A year later, the National Journal‘s Ron Brownstein began touting the “Coalition of the Ascendant,” gloating that Democrats didn’t need blue-collar whites anymore. Woo hoo! Obama “lost more than three-fifths of noncollege whites and whites older than 45.” But who cares? He crushed with “minorities (a combined 80%).”

Democratic pollster Stanley Greenberg’s 2019 book, RIP GOP, explains the coming death of the Republican Party as a result of … sucking up to Wall Street? Pushing pointless wars? Endlessly cutting taxes? NO! The GOP’s demise would come from the fact that “our country is hurtling toward a New America that is ever more racially and culturally diverse … more immigrant and foreign born.”

And these were the genteel, nonthreatening descriptions of how immigration was consigning white voters to the Aztec graveyard of history.

On MSNBC, they’re constantly sneering about “old white men” and celebrating the “browning of America.” A group called Battleground Texas boasts about flipping that deep red state to the Democrats — simply by getting more Hispanics to vote. Blogs are giddily titled, “The Irrelevant South” (“the traditional white South — socially and economically conservative — is no longer relevant in national politics”). MSNBC’s Joy Ann Reid tweets that she is “giddy” watching “all the bitter old white guys” as Ketanji Brown Jackson “makes history.”

This week, the media’s leading expert on the crazies who believe in replacement theory is Tim Wise, popping up on both MSNBC and CNN to psychoanalyze the white “racists.” He’s been quoted, cited or praised dozens of times in The New York Times. This isn’t some fringe character, despite appearances.

In 2010, Wise wrote an “Open Letter to the White Right” that began:

“For all y’all rich folks, enjoy that champagne, or whatever fancy ass Scotch you drink.

“And for y’all a bit lower on the economic scale, enjoy your Pabst Blue Ribbon, or whatever shitty ass beer you favor …

“Because your time is limited.

“And unlike, say, the bald eagle or some exotic species of muskrat, you are not worth saving.

“In 40 years or so, maybe fewer, there won’t be any more white people around who actually remember that Leave It to Beaver …”

Have you ever noticed how obsessed liberals are with “Leave It to Beaver”?

“It’s OK. Because in about 40 years, half the country will be black or brown. And there is nothing you can do about it.

“We just have to be patient.

“And wait for you to pass into that good night, first politically, and then, well …

“The sound of your empire dying? Your nation, as you knew it, ending, permanently?

“Because I do, and the sound of its demise is beautiful.”

I don’t know about the Jewish cabal version of GRT, but as for liberals using immigration to bring in more Democratic voters, as Maya Angelou said, “When people show you who they are, believe them.”

“For the past few weeks, U.S. President George W. Bush has been surrounded by a secretive circle of advisers and public relations experts, giving rise to all kinds of conspiracy theories and debates. It’s been said that the group’s idol is German Jewish philosopher Leo Strauss.”