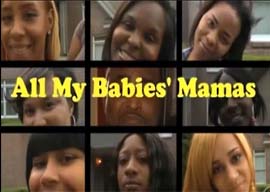 Cable TV’s Oxygen channel was founded in part by Oprah Winfrey, but it appears to have finally jumped the shvartze with a proposed program called All My Babies” Mamas. Originally slated to appear in the spring, the one-hour special now hovers in reality-show limbo due to a torrent of protest from outraged Pundits of Color. Their chief lament is that the show unfairly attacks, demeans, and stereotypes the black community despite the fact that it is, well, a reality show starring real black people. Really black people.

Atlanta-based rapper Shawty Lo (born Carlos Walker) is the man whose loins produced all those babies from all those mamas”eleven babies and ten mamas, to be exact.

When he was a teenager, he sold drugs and mugged people. By the age of 15, Carlos had fathered his first child….After a decade of selling drugs, Walker decided to turn his attention to music and began performing as Shawty Lo.

Mr. Lo is currently dating a 19-year-old girl whose womb has yet to sprout forth with the rich, humid fruit of his seed, but to be fair, she’s roughly the age of his oldest child, so give the young lady some time. This teenage lass was scheduled to appear alongside Shawty, the babies, and the mamas”the latter of whom were tagged with wacky handles such as “Fighter Baby Mama,” “Crazy Baby Mama,” “Jealous Baby Mama,” and “Shady Baby Mama””on this TV extravaganza which, unlike all of those mamas” babies, may soon be aborted.

“The outrage has little to do with the show being unrealistic and everything to do with it being far too realistic.”

One segment of the promotional trailer (the full version was yanked from YouTube shortly after the media blacklash occurred) shows Shawty struggling to remember all his chilluns” names.

In a press release that was pulled from their website after the controversy erupted, Oxygen had described the show thusly:

This bold new series shows every second of the drama-filled lives surrounding a unique “modern” family unit, as they navigate their financially and emotionally connected lives. As the household grows, sometimes so does the dysfunction, leaving the man of the house to split his affection multiple ways while trying to create order…but sharing your man with several opinionated women is bound to create issues.

The resultant blacklash was even funnier than the show’s description. Boyce Watkins in the Huffington Post called the program “an insult to Black Parents Everywhere,” adding that “11 children with 10 women is like spraying your sex organs in every direction without thinking much about the target.” On the esteemed MyBrownBaby website, Nick Chiles said the show impeded black America’s “upliftment,” predicting that “anthropologists will one day point to Shawty Lo (aka Carlos Walker) and ‘All My Babies’ Mamas’ as the cultural nadir of America, the moment when we ceased to have a functioning moral compass….” Black radio host Morris O’Kelly issued a statement that “As a respected African-American media professional I can not [sic] in good conscience allow this program to move forward.” And the Chicago Tribune‘s Clarence Page offered up an exasperated “Lincoln freed us for this?”

We do not need another reality show that shows our people in a bad light. Our community needs to stop watching this nonsense and boycott these companies that are owned by white folks….This is not a hate petition against Shawty Lo and his “baby momma’s”. We simply will not support ignorance in any way, shape or form.