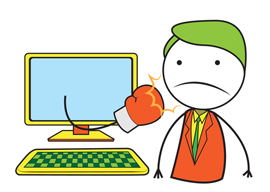 ThoughtCatalog.com has had a crappy week.

Many people are suddenly hearing about that upstart online magazine for the first time, on account of not one but two “controversies” of the sorry sort we”re all too familiar with.

(Not me. Full disclosure: Thought Catalog published my recent e-book.)

For those who remain blissfully ignorant: Thought Catalog debuted four years ago, as a first-person essay site geared to Millennials, and boasting a “value-neutral editorial policy governed by openness.” Almost anyone could post there, with minimal or no editorial interference. As well, unlike all its competitors”the likes of xoJane”Thought Catalog isn”t de facto “progressive,” something they feel obligated to briefly address on their “About” page, under the question, “Why do you publish offensive content?”

“Getting more or less fired from your own ad agency”in fact, this whole “scandal””is awfully punk rock, so when I called Gavin for comment, I wasn”t surprised to hear that he wasn”t giving too many fucks about it all.”

Amusingly, Nieman’s mission statement, just like Thought Catalog’s, expresses a prim, pageant-contestant-type concern for “the future of journalism””a future that, if the former gets its way, will not include the latter.

“There’s no need to enumerate the breadth and variety of godawful content published by millennial angst engine Thought Catalog,” Nieman huffed on August 14. “The site’s propensity for publishing garbage is so well known, they actually address it in the FAQs.” (That’s the “offensive content” bit I mentioned above.)

No doubt you can smell a sizable “but” heading in your direction.
Sure enough, Nieman wants you all to know that it is outstandingly shocked and appalled by a particular Thought Catalog essay, one so “egregiously racist” that it “cannot be ignored.”

This essay, by Anthony Rogers, was entitled “Ferguson, Missouri Looks Like a Rap Video,” and was illustrated with a news photo of a young black man looting a smashed up shop. Its most memorable line was something about area stores being denuded of hair extensions and other accoutrements of “urban” fashion.

“Was” because Rogers” piece has since been hidden behind the Internet equivalent of a childproof safety cap”you have to click through a trigger warning page to get to it, and compared to the shrieking, scary, reversed-out giant sans serif type telling you how offensive the post is, the “continue” button is so comically tiny as to be almost negligible.

However, I can point readers to a site that has far, far more readers than Thought Catalog. It’s called World Star Hip Hop, but its Haitian-American founder’s nickname for it””the CNN of the ghetto””is more aptly descriptive.

WSHH offers thousands of videos of things like “rappers engaging in fights with other rappers,” along with cell phone footage of “knockout games” and other crimes”including, quite recently, what appears to be a woman kicking a toddler. Bear in mind that this footage is rarely purloined from security cameras, but is shot and proudly uploaded by the perps themselves, or their friends.

Interestingly, one of the most commented-upon videos currently up at WSHH is by an African-America fellow calling himself “Jonathan.” He chastises other blacks for, well … looting Ferguson stores for hair extensions.