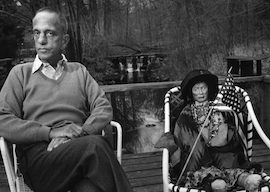 NEW YORK—The Roy Cohn documentary Bully, Coward, Victim was successfully screened last week at Lincoln Center to a full house, then turned into a pro-Rosenberg, anti-Trump manifestation. Had I known this, I would not have taken part in it, but what is a poor little Greek boy trying to make it in the movies to do? Do it, said Michael Mailer, and I followed orders like a good German soldier remaining in Stalingrad.

Here’s the problem with the documentary. The atomic traitors emerge as heroic victims, my friend Roy Cohn as worse than Satan. There is something very wrong in this. The Rosenbergs betrayed their country by passing secrets to the Soviets, and the film depicts their treason as unimportant. Truth be told, the real traitor was the Brit Fuchs, a scientist who provided what the Reds needed to go nuclear. Still, the Rosenbergs were traitors at a time when Uncle Sam and the Soviet Bear were eyeballing each other and ready to shoot. Roy Cohn was a young aide to Senator McCarthy and made his name by ensuring the couple were sent to the electric chair. Ivy Meeropol, the granddaughter of the Rosenbergs, had her father (son of the executed couple) on stage following the film, and we saw a lot of him as a little boy visiting his parents at Sing Sing. (A heart of steel required here, especially when the old man goes on stage and blubs about his parents’ death 66 years ago.)

But here’s my point: All the spies (Greenglass, the Rosenbergs, Fuchs, and others) who were caught were Jewish. I remember in school students remarking on the fact that although Americans had fought and died in order to save Jews—as had the Brits—the traitors were giving aid to a country that wasn’t known for its philosemitism. So, according to the very few pro-Cohn voices, when Roy Cohn, scion of a devout Jewish family, went after the spies he was doing Judaism a favor. This point of view is not stressed in the documentary, in fact people denounce Roy as bringing shame to the Jews.

“Cohn did not land the Rosenbergs on the electric chair, their own actions did.”

Betrayal of Uncle Sam does not figure into the film. Roy’s aggressiveness in pursuing the Rosenbergs does. I found that intellectually dishonest, because Cohn did not land the Rosenbergs on the electric chair, their own actions did. Betrayal, however, brought back some very poignant memories. I was just 4 years old when one of my father’s friends, a department-store tycoon, was condemned to death by a Greek court for having presented another person’s X-rays suffering from tuberculosis as his own, in order to avoid military service. The year was 1940 and Greece was fighting against the Italians in the north and about to be attacked by the Germans. My mother’s uncle, and the man who had actually brought her up, was chief justice of the Supreme Court. My father asked my mother to plead for a stay of execution, but my uncle refused. With tears in her eyes she told me that her uncle’s words are always etched in her mind. Something like “I will do anything for you, my dear Mando, but while poor farmer boys are fighting on the front a rich man cannot be allowed to get away with it.” He was shot at dawn the next day. His family and mine remain good friends to this day. The execution and my great-uncle’s words made a huge impression on me, a 4-year-old. I could hardly read, but I had been warned: There is a higher loyalty than to self—love of country.

Yes, patriotism has been called the last refuge of a scoundrel and all that, but loyalty and love for one’s nation still make one stand tall. To this day, remembering seeing the first Italian prisoners of war marched into Athens after our first major victory against the Duce’s forces in Koritsa, Albania, still makes me feel awfully proud. E.M. Forster’s famous saying about choosing a friend over one’s country is bogus. If the friend has articulated his or her disapproval of a country and has made no bones about it, fine. They have every right to do whatever they feel is right. But the Rosenbergs and the Greenglasses and the Fuchses were not dissidents—to the contrary, they worked for the government and were considered patriotic for doing so.

Mind you, the ambiguities of the Cold War made things far more complicated than before. There were good guys and bad guys and both sides claimed to be good. The irony of all ironies is that many Germans thought that Claus von Stauffenberg was a traitor, and a street was named after him only twenty years after the war was over. If the Palestinian problem is ever solved, it will be interesting to see who emerges as a traitor and who comes out a hero. Ivy Meeropol is a very nice girl who is trying to reverse what she considers a wrong. She is wrong, but this is according to little old me. Roy Cohn had a gruff exterior, but I always thought he was gooey inside. Broadway, the movies, and now a documentary have made him the world’s most evil man. And as always they got it the wrong way up. Next week I’ll tell you how a woman threatened to break my nose. Ouch!