Heroes of the Track 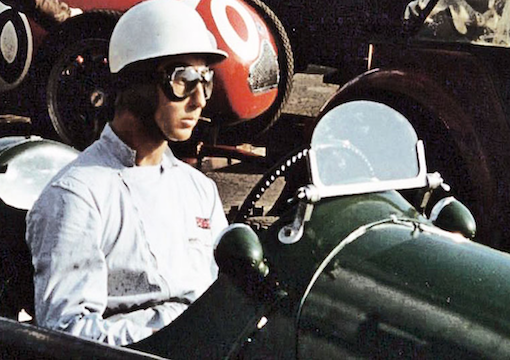 There are famous heroes and then there are unsung ones, and I basically prefer the latter as I have known a few of them in my lifetime. The funny thing is, I grew up learning only about famous heroes, the ancient Greek type, starting with the semi-god Achilles. Homer didn’t deal with unsung ones; everyone was larger than life, and there were only winners and losers. The person I will tell you about this week would not have been a Homeric hero, but he certainly was one while participating in the most dangerous game in the world.

Lance Macklin was an old Etonian, a Navy World War II vet, and a dashing race car driver at a time when a shunt meant instant immolation and certain death. Just off the top of my head, here are a few names of young top drivers who were lost while racing before the sport became safer than football or volleyball: Ascari, Castelloti, Levegh, Musso, von Trips, Behra, Collins, Bonnier, Portago, Bandini, Clark, Scarfiotti, Courage, Severt, and hundreds more who died in the golden age of motorsport during the ’50s and ’60s. (Only four great ones survived: Stirling Moss, Jackie Stewart, Jack Brabham, and Graham Hill.) The dimension of tragedy—combined with speed, adventure, and youth—was a natural follow-up to the flying heroics of the war.

Jack Barlow is a Kiwi, New Zealanders being among the people I like best, but he’s also a very good writer and has captured the mood of the times. Why and how he chose to write about Lance Macklin I do not know, but he’s done a heck of a job, and none of the dialogue that takes place in the story is made up. It’s all taken from contemporary accounts and interviews. And I should know, as Lance was my uncle-in-law. I was married to his niece, Cristina de Caraman, the most beautiful of all young girls in Paris back in the early ’60s, so pretty in fact, Paris Match put her on the cover under the heading “C’est une deb.”

“The dimension of tragedy—combined with speed, adventure, and youth—was a natural follow-up to the flying heroics of the war.”

Needless to say, the marriage did not last long. We were both living an F. Scott Fitzgerald life, going out every night, and I was always chasing you-know-what. Yet Cristina and I have remained good friends all these years, and when she recently rang me from Palm Beach just to say hi, I told her that I was writing about her uncle Lance. He had a sort of sad ending in a retirement home, something people like myself do not understand, but it’s an Anglo-Saxon perversion so I’ll leave it at that. But now back to racing and his part in the greatest tragedy of the track.

Jack Barlow’s book is called The Lance Macklin Story: A Race With Infamy. This is so because on June 11, 1955, Lance was a central player in motor racing’s worst tragedy. Close to eighty people were killed and I believe hundreds were injured when the Mercedes of Pierre Levegh went flying at 150 mph into the crowd after coming into contact with Macklin’s Austin Healey. I will not go into details, but Lance got the blame for a Mike Hawthorn (eventual winner of the 24-hour race) mistake. The book deals with the tragedy in detail and in fairness. That day, needless to say, overshadowed Lance Macklin’s remarkable career as one of Britain’s leading and fastest drivers. I got to know Lance well during my brief marriage to his niece. He had two beautiful sisters, Nada, who married a French duke and was my mother-in-law for a couple of years or so, and Mia, who married a very rich American aristo but got bored with him and left, asking for nothing.

Lance was known among the racing community for being very, very fast. He and Stirling Moss were close friends, and when not competing against each other they were nonstop chasing the W: women. Both were girl-crazy and both were very much married and so on. Both were for obvious reasons very, very good men. Lance could have written a book of “raw, unflinching honesty” like Harry the half-wit apparently has, but back then gents didn’t revert to such tactics. Enhancing one’s celebrity with a book was not on.

Along with many other things, death-defying, dashing race car drivers are no more, and the present bunch resemble robots more than the types I used to follow. Now the fastest car wins no matter who drives it, whereas it was the driver not the machine who dominated in the past. My friend Taffy von Trips in an inferior Ferrari tried to pass the great Jim Clark in the Monza Grand Prix of 1961 and died in a fiery crash. I went to his funeral in his family castle near the Black Forest and it was heartbreaking. Alas, I was also present when Lorenzo Bandini died in the chicane at Monte Carlo.

As they say, never mind, it’s all in the past. Except that the book brought back wonderful memories of fearless young men facing death each Sunday after getting drunk at the Tip Top in Monaco on Saturday night. I remember seeing Mike Hawthorn and Peter Collins doing just that, followed by racing all day Sunday, Hawthorn in his green jacket and bow tie. Collins died in Germany a month later. Hawthorn won the championship and died in a road accident that winter. No sad or flailing years for them.