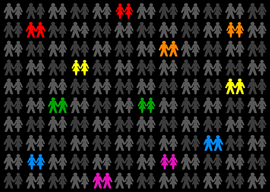 Hey LG, it’s time to drop the BT. It’s also time to drop any other letters that are straggling to join that ever-expanding abbreviation. They”re holding you down.

In recent years, the abbreviation has swollen beyond the already bloated “LGBT” into atrocities such as “LGBTQIAP.” It has become a garbled mess that even some gays are calling “alphabet soup.” Apparently, “Bi” and “Transgendered” became too limiting, so they threw in Q (queer or questioning), I (intersex), A (asexual or allies), and P (polyamorous or pansexual). Bestiality and pedophilia haven”t been allowed past the front gate, but give them time.

The newer, more militant definitions of sexuality are “fluid” and refuse to get stuck in antiquated definitions. The only judging they allow is toward people who accept the gender they are born with. Such people are known to those in the know as “cis scum.”

Here’s the thing, gays and lesbians: We like you. We really do. Even the Pope doesn”t judge you anymore. We were wary of gay marriage for a while because we sensed you were only using it as a place to showcase your human rights. We suspected you didn”t really want to get married. (I still suspect this deep down, but I”ve become the minority.) After all, why get married if monogamy and child-rearing aren”t your thing? Why would you want to have the same fight again and again for half a century? (For my wife and I, it’s the way she overpacks every drawer in the house.)

However, you kept harping on it like a nagging housewife and eventually we said, “OK, OK, you can get married.” Even Bill O”Reilly and Rush Limbaugh finally relented. If you want to join our traditions, you”re more than welcome. If the GOP is to have a future, it needs to get over social issues. Even staunch libertarian Mark Cuban agrees.

Look, we weren”t very noble toward gaylords in the past. In our defense, you are weird creatures. You are vegetarian lions”born with gigantic fangs for ripping apart flesh, but you”d rather have a carrot. The pack needs some familiarization to get used to that. In the 50s and 60s, our police harassed the heterosexually challenged, forcing them to meet in dark alleys and nefarious speakeasies. Then, sometime after the sexual revolution, society agreed on a “Don”t Ask, Don”t Tell” policy. We knew you were gay. We weren”t blind. Freddie Mercury pranced around onstage wearing a feather boa and leather pants crooning like a high-pitched Liza Minnelli for a band called Queen. Liberace flopped around his piano like a fop. The nation laughed along with Paul Lynde as he tittered through his big gay teeth. Siegfried and Roy basked in each other’s love and bodily fluids while giant cats of indeterminate sexuality surrounded them. We understood that the Village People didn”t enjoy the YMCA simply because it was an affordable gym. We were fine with it because it wasn”t pushy.

Then the ante was upped and gay parades started featuring raving homosexuals dancing around in S&M gear and blowing each other on balconies. It went from, “We”re here and we”re probably queer” to “We”re here. We”re queer. And if you don”t like it, you can go fuck yourself.” This caused animosity. AIDS didn”t help. The backlash was so intense that the late 80s and early 90s started to resemble the 50s and 60s. I think it was around this time that gays and lesbians started to feel like post-WWII Jews and decided they had to look out for themselves because nobody else would. In the interest of numbers, they brought in anyone remotely unusual. “Queer” went from a synonym for “homosexual” to, well, anyone unusual. By the early 2000s, the LGBT movement was a proud army.

I think this was a mistake. You should have just given it time like Canada did with the Brits. Twenty-five thousand Americans died in the process of kicking out the English. Canada merely waited until the English left. Nowadays most people accept homosexuality as natural. When you see a sexual proclivity rear its purple head century after century, you conclude it’s genetic. (Rape and murder have been around forever, too, but such actions hurt people, so there’s an incentive to stop them.) By the time the lesbians and gays had assembled their misfit army of ideological terrorists, we had already accepted them.

Gays adopt. They go to church. Sure, they live a much more hedonistic lifestyle than us, but they”re still recognizable as earthlings.

But the BTQAP crowd doesn”t know what they are. What the fuck is an “ally,” and how easy is it to become one? Do you get to be part of the movement if you have a gay friend? Does that now make you oppressed? Polygamists are an oppressed class? No, they”re not. They”re a fad. We”ve seen people try it, and it always blows up in their faces. Where are all the old polygamous couples? Where are all the old bi guys or girls, for that matter? It seems like sooner or later, all “bisexuals” wind up picking one side or the other.

There is no such thing as a “cis” woman who identifies as male. You”re an annoying college student trying to sound special. You”ll have three kids and a backyard in less than a decade. Gays and lesbians remain so for life and should be wary of these hangers-on trying to cash in on someone else’s oppression. They”re like male feminists and white Rastafarians. They have nothing in common with the species they ape.