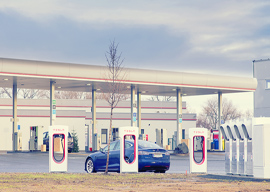 NEW YORK—Question: How can you tell the difference between Elon Musk and an ordinary Tesla owner?

Answer: Elon Musk will eventually stop talking about his Tesla.

I never quite got the whole Tesla thing. Is there some connection between multi-millionaires and ecological crusading that I was previously unaware of? Do people really buy $138,000 cars so they can save the planet from greenhouse gas emissions?

I demand to see that fossil-fuel imprint, Mister Tesla Dude. Yes, you just drove from Cape May to Cape Cod without a single gallon of gasoline, but let’s see the size of that refrigerator back home, the one where you keep all the spelt, kale, chia seeds, tofu, seaweed and holistic cat food that you bought this morning at the Whole Foods on Seventh Avenue. I’m thinking those teak freezer drawers are pulling some kilowatts.

But who am I to talk? My 1970 Plymouth Hemi-equipped Barracuda has been up on blocks since 2008 because my regular mechanic, Bubba Barclay of Houma, Louisiana, has been unable to make it street-legal in any state except Alabama (no emissions inspections). That baby pulls 500 horsepower, still has the original plum-colored paint, and gets an amazing 4 miles to the gallon, 6 on the highway. If my Hemi Cuda met a Tesla on the open road, it would be like the opening scene of War of the Worlds, in which a Martian fighting machine destroys Bayonne, New Jersey. Tom Cruise would have to come assassinate my ass.

Meanwhile, we now have an existential threat to the blithe moral superiority of the Tesla owner.

Can this be true?

“If my Hemi Cuda met a Tesla on the open road, it would be like the opening scene of War of the Worlds, in which a Martian fighting machine destroys Bayonne, New Jersey.”

For people who got into Tesladom in 2008 (remember the Tesla Roadster? neither do I), this must be the equivalent of waking up and finding out that homeless people will soon be living in Teslas parked on the side roads of East Hampton. Thirty-five thou is, like, plumbers. No, worse than plumbers. Weathercasters.

There was a day last year when the price of Tesla stock rose so high that it surpassed General Motors, Mercedes, Ford and every other automobile company in the world and, at that moment, Tesla was the biggest car company on the planet.

Let’s think about that.

Even if you wanna compare cars favored by millionaires, Mercedes comes in at 2.3 million and BMW at 2.1 million.

A hundred thousand is not enough cars.

And that’s another thing about Tesla that’s super-douchey: they market it like an iPhone, complete with showrooms that are not located in massive concrete plazas out on the interstate, like God intended, but are actually placed in shopping malls, right between Cartier and the wood-paneled shop that sells ugly $200 neckties from London. That way you can window-shop while you’re going in to get this season’s silk cravat.

By the way, the actual key to the car—or the fob—looks like a computer mouse shaped like a Tesla. So you access the vehicle with something similar to what a six-year-old uses when he gets his first baby computer. You can press different parts of the fob to do things like back out of a parking spot without getting inside or “open the frunk,” the frunk being a Doctor Seuss word used to describe a trunk located in the front of the car.

Once you’re on your long-distance Tesla road trip, you would think they would have electric car chargers at, say, truck stops and gas stations, but . . . nope, that would be funneling money toward the outdated soon-to-be-extinct fossil-fuel planet-fouling military-industrial complex. No, what you’re gonna do is pull into a mall, high-end restaurant, hotel or resort—yes, I said resort—where there are Superchargers that work only with a Tesla, no other car, and you can recharge in “only an hour.”

This is stated with apparent pride by all Tesla owners. I don’t know about you, but I can gas up at any of five million different places on highways and surface roads in well under an hour, even allowing for standing in line at the Fake Starbucks or the Quickie Burger King or the Dasani Kiosk after buying trucker DVDs starring Jerry Reed with soundtracks by Ferlin Husky. In terms of time management, I don’t think pulling in at the White Sulphur Springs golf resort—even if it’s Scallop Sashimi Day—does much for you.

And then there’s the sales pitch for the Tesla. First they tell you it’s named after a 19th-century Serbian inventor named Nikola Tesla. Okay, fine, this really wouldn’t seem like the era to be celebrating Serbs, what with Ratko “The Butcher” Mladic and friends, but Tesla is supposedly the inventor of the induction motor and Thomas Edison would be too much of a direct-current guy, even though he was an American who did build an electric car, unlike Tesla.

So, anyway, they have the nerdy back story, but then what’s the question everyone asks when they go to a car lot?

Can this car kick ass?

And they actually have a great answer to that question. The top-end Tesla can go zero to sixty in 2.4 seconds.

But that’s not what they show you.