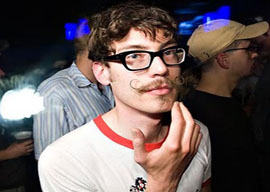 UCLA recently hosted a panel to discuss youth culture, and as “one of hipsterdom’s primary architects,” I was asked to come along. I showed up late for the event wearing nothing but a pair of pants and holding a bottle of beer, treating the whole scene like the cafeteria in Animal House, because that’s both fun and funny. The other panelists were mostly bloggers, magazine publishers, and young entrepreneurs employed by the hipster trend. That includes the history professor who used the word “Negrification” with a straight face.

For those of you old fogies still perplexed by the term, a “hipster” is a young person (between the ages of 18-25) with an enthusiasm for contemporary alternative pop culture, primarily music and fashion. They wear oversized glasses with brightly colored frames, tight pants, neon “ironic” T-shirts, and Chuck Taylors. Their musical tastes run the gamut; so do their ethnic and social backgrounds. Oh, yeah, and they read Vice magazine and Street Carnage, both of which came out of my head.

The most common misconception about these kids is they are trust-fund posers who buy what they”re told and shamelessly steal both black and white working-class culture. These patronizing criticisms almost always come from the previous generation who are mad at the world for letting them age and are desperate to prove that today, youth is more wasted on the young than ever before. I”ve been accused of defending hipsters because they made me rich, but the real reason I never turn down an opportunity to speak at these events is I love exposing their transparent gripe for what it is: sour grapes. The kids are all right.

There are two things that make the hipster subculture unique. One: They”re better than their predecessors. Two: Everyone says they”re worse.

“Die Hipster Scum” is a common sticker and T-shirt here in New York. Time Out magazine had a cover story called “Why the Hipster Must Die,” and Gawker has campaigned to end the trend entirely. Last year, a magazine called n+1 held a panel condemning hipsterdom as “white power” because it is somehow inexorably linked to gentrification.

The first question moderator Christian Lorentzen asked the UCLA panel was, “Why do they hate us?” I found this particularly ironic, because he was the one who wrote the Time Out feature. I confronted him about this, and he said he did it for the paycheck and didn”t believe what he wrote. I told him the question should be, “Why do YOU hate us?” but went on to explain what’s really going on.

“There are two things that make the hipster subculture unique. One: They”re better than their predecessors. Two: Everyone says they”re worse.”

Now that being a teenager is permissible well into one’s 40s, you have old people within the youth-culture scene bitching about “the kids today.” Imagine Clint Eastwood’s character from Gran Torino if he was still at the club. “This goddamned kid calls himself a DJ?” he”d ask with a PBR in his hand and a trucker hat to hide his bald spot. “He doesn”t even know how to beatmix, for chrissakes. It’s just a pile of MP3s.” The old will always see the young as naive and arrogant”they are. The only difference today is the old person is writing about nightlife for a twentysomething blog instead of worrying about his mortgage and winterizing his lawn (which is coming up soon, guys”I”d recommend at least four bags of lime if you’re around a lot of evergreens).

Everyone else on the panel handled the question similarly, and the consensus seemed to be that hipster-bashing is lame. “It’s like when an old Brooklyn goombah calls someone a “pretty boy,”” I said to the crowd. “He’s calling the guy attractive and young. Insults like that say a lot more about the insulter than the insultee.”