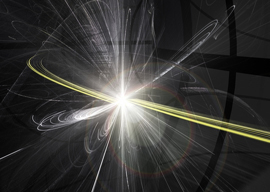 The possible discovery of the Higgs boson was announced on the Fourth of July. Confused nerds feigned excitement. I yawned and threw another sausage on the grill. The Higgs boson is inarguably an important idea in High Energy Physics. It is also a deeply ironic idea. The irony requires some understanding of modern physics” history, personalities, and business.

Physics is the science of matter and energy. If your knowledge of physics comes from popular sources, you probably think that physicists only study abstruse entities such as the Higgs boson. But such arcana are only studied by one branch of physics, generally known as “High Energy Physics.” It is called “High Energy” because the interactions studied only happen at preposterously high energy levels far removed from anything we see in the universe, let alone everyday life. The Higgs boson was observed at around 125 billion electron volts. By contrast, a hydrogen bomb’s nuclear-fusion reaction releases energy of around 17 million electron volts per nucleus fused. The bomb reaction takes place at around 100,000 electron volts. Burning hydrogen chemically releases only a few electron volts of energy per hydrogen atom. Room-temperature molecular energies are around 1/40 electron volts. The photons in cell-phone radiation are something like 1/10,000 electron volts.

“Why not return to physics’ heroic roots, where individuals and small teams could make important contributions?”

Physicists study the high-energy limit of physics because nature’s forces seem to unify and simplify there. There is a theory called “the Standard Model” which unifies three of nature’s four forces into one mathematical structure. The theory has been considered verified since 1973, when physicists at CERN discovered the W and Z bosons. The Higgs boson was the last unobserved piece of this theory; hence the excitement.

The way the High Energy guys tell the story, once their Standard Model is complete and unified with gravity, we understand everything and the rest is just chemistry. The High Energy branch of physics has dominated research since the 1950s. The High Energy guys have more theorists and money for their experiments than other branches of physics. Every physics department I’ve visited in the US has a proportion of High Energy Physicists ranging from a quarter to half of the total head count.

The “Higgs idea” was first proposed way back in 1962 by Philip W. Anderson. Higgs and others developed the more mathematically complete relativistic theory in 1964. Anderson isn’t a High Energy Physicist; his idea for the Anderson-Higgs boson came from his studies of lower-energy macroscopic matter’s properties.

It’s ironic that Anderson had the original idea and gets little credit for it. The greater irony is the fact that Anderson has been a critic of High Energy Physics’ hyper-reductionist approach. His famous essay “More Is Different” makes the argument that reductionism doesn’t get us far in understanding the universe. While the Standard Model is very good in the high-energy limit, it is generally useless in the study of lower-energy phenomena, some of which may be very interesting and relevant to human beings. We certainly know more about High Energy Physics” ultra-microscopic world than we used to, but this hasn”t increased our physical understanding of the rest of the world.