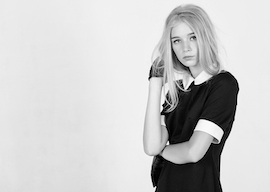 I have no scientific evidence, no statistical data, that proves a decrease in beauty, just my own aging eyeballs that have been assessing the female form for decades. It’s sad what I’m seeing these days.

The young women on today’s campuses eschew lipstick and makeup. They dye their hair inhuman shades of green and purple. Their clothes are bulky with sleeves dangling to their unpolished fingernails. Their shoes are sensible—Birkenstocks, Crocs, and Uggs—and there is nothing less sexy than sensible shoes.

When you add the tattoos and the piercings, and the general lack of grooming, the sum total screams, “I don’t care what you think. I’m not trying to look pretty. I don’t want men hitting on me.”

No wonder Victoria’s Secret is losing business. These gals are certainly not wearing lacy lingerie under their hoodies.

The current campus obsession with political correctness must be the cause. The #MeToo movement has spawned a generation intent on eradicating binary gender norms and classic sexual seduction, where men initiated the action.

Wolf whistles are out. Now a frat boy can be charged with rape if he doesn’t ask permission before trying to kiss a girl.

It’s a far cry from the days when Playboy sent photographers to college campuses for pictorials like “Girls of the Big Ten” and “Girls of the Ivy League.” The men’s mag had no trouble finding amateur pinups ready to strip down and pose in their full frontal magnificence.

If Playboy tried it today, no woman would volunteer, and if anyone did, I doubt the photos would be usable, even with Photoshop.

I’m dating myself when I recall the coeds—yes, that’s what they were called—at Yale in the early ’60s. They wore skirts over their hairless, nylon-clad legs, cashmere sweaters, and pearls.

The changing fashions didn’t really matter. The women were making an effort to wear clothes and accessories that flattered their figures, that accentuated their youthful beauty. They wanted the male gaze.

I spent many idle hours on campus sitting with friends at a heavily trafficked intersection, rating the women who hurried by on their way to class. No one ever got a 10; no one is perfect. But there were plenty of 8s and 9s. And they smiled knowingly as they sauntered by.

We weren’t cruel. No girl got less than a 5. Many got no rating at all. They simply weren’t worth consideration. This was a celebration of sexiness, not some exercise in insulting the less fortunate.

Some I pursued without success. I learned a gorgeous blonde from Texas had been named Edwina because her father had been hoping for an Edwin Jr. I didn’t learn much else. Edwina ascertained, as her father would have drawled, I was all hat and no cattle.

I recently revisited the campus, and felt sorry for today’s co-eds. I didn’t see one 9, or even an 8. I saw many Asians. I’ve always liked that David Bowie song “China Girl,” but none had me singing, “And when I get excited/My little China girl says/Oh baby, just you shut your mouth.”

The college girls just aren’t as pretty as they used to be. It’s a scientific fact.