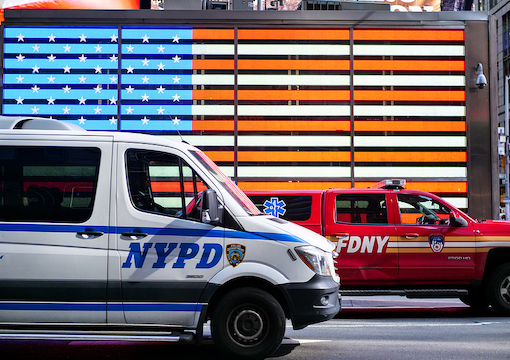 NEW YORK—Ms. Geniece Draper is a Noo Yawker who has been in the news lately. She is 40 years old with modern Bagelite manners, and by that I mean they are not exactly those of, say, C.Z. Guest or Babe Paley, two ladies who are no longer with us but whose presence in drawing rooms we could do with rather desperately. Ms. Draper is angry as hell and has declared she will not take it anymore. She was recently charged with grand larceny as well as petit larceny for snatching a wallet from a Manhattan man. Nothing strange about that, it’s an everyday occurrence in the city that never sleeps, in fact a New York Post columnist wrote on a different matter that no one gets PTSD from “getting pickpocketed.” Yes, I agree, but for one small detail: Ms. Draper’s victim had just been run over by a truck and was as dead as the proverbial doornail as he lay in the middle of a downtown street. That’s when Ms. Draper appeared, took one look, and then lifted the poor man’s wallet. After her arrest she was immediately freed under the state’s new bail laws. She only had forty prior arrests.

What distinguished Ms. Draper from other pickpockets who usually when caught blame their sleight of hand on nervous tics and other pathologies, is that she blamed the dead man, Jerome Smith, age 62. She also claimed that Smith and she used to be an item. As Noël Coward would surely have said, some item. And it gets better—actually far, far worse: Smith was hit by a tractor and dragged near a construction site. Draper was caught in surveillance camera footage reaching into the dead man’s pocket and taking his wallet. But here comes the really juicy part. The video showed onlookers cheering her on. And you thought some Mongols in a faraway place long ago acted unreasonably.

“This must be a brutish new low even for New Yorkers, cheering the fleecing of a dead man.”

This must be a brutish new low even for New Yorkers, cheering the fleecing of a dead man. If you thought that was sick, try Larry Griffin, 29, a parolee who was attacked last week in the subway by a weirdo dressed as a ninja. Griffin was bonked on the head with a knife by the ninja, who got away. Then it emerged that the conked one had been charged back in 2017 for showing a video to a minor that involved him having sex with a chicken. And you thought the Conservatives were funny when picking prime ministers. Over here youngsters keep getting shot and killed while riding the subways, and older women are mugged daily by wackos, while the lefty media is busy censoring and canceling free speech. It has gotten so bad, this grievance and victim epidemic, that the trashy Bagel Times has announced that niche sports play a role in perpetuating inequality. Fencers, polo players, rhythmic swimmers, skiers, squash players, golfers, not to mention real tennis players will all end up in an American gulag in the near future because some ugly bald-headed nerd in the Bagel said so.

No wonder the latest polls show that only 7 percent of Americans trust the media. Hollywood, however, is a different story. It just so happens that a few nights after the Draper horror I turned on my television set and watched a flick that those lowlifes who cheered her on must value on a par that I do Gettysburg and The Best Years of Our Lives. No use giving it any publicity, suffice to say it’s the story of a female who is in debt and goes into crime in order to get out of debt. Stolen credit card fraud leads to more serious crimes and bigger profits. Finally our heroine ends up wealthy in South America teaching poor natives how to be rich thieves. Moral of the story: Crime pays.

It is said that successful movies are about the change from “this to that, poverty to riches, justice to injustice.” It is also said that endings matter most. Well, this was a crappy movie with a crappier message, written by an untalented crap artist who should be forced to watch La Grande Bouffe, a French tale of four men who eat themselves to death in a villa, after he’s forced to swallow about fifty laxatives. Ouch!

Actually, what these untalented Hollywood types are doing should be called crimewashing. The Saudis practice sportswashing by buying football teams and golf players, which helps a sports-mad public forgive and forget Saudi crimes against women and homosexuals. Crimewashing in movies helps the public forget the lack of talent of the moviemakers. Back in the good old days such shenanigans would never work. Lack of talent got you a job at Schwab’s Pharmacy as a soda jerk. Today, things are different. Everyone is great, beautiful, and talented. Everyone deserves to be rich, and the politicians promise to give more and more money to every Tom, Dick, and Molly. Students are relieved of their debt and more handouts are promised. No wonder both the U.K. and the U.S. are nearly becoming ungovernable.

I write about these freak shows over here to remind Takimag readers there are clowns everywhere, not only in the British Parliament. By the time you read this there will be another prime minister, and he or she better be able to control the members and the government. Teresa, Boris, and Liz were unable, hence the mess. Good luck.