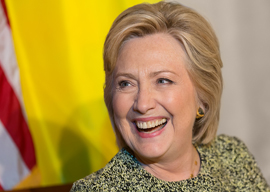 After posting Friday’s column, “A Presidency from Hell,” about the investigations a President Hillary Clinton would face, by afternoon it was clear I had understated the gravity of the situation.

Networks exploded with news that FBI Director James Comey had informed Congress he was reopening the investigation into Clinton’s email scandal, which he had said in July had been concluded.

The only explanation, it seemed, was that the FBI had uncovered new information that could lead to a possible indictment of the former secretary of state, who by then could be the president of the United States.

By Sunday, we knew the source of the eruption.

Huma Abedin, Clinton’s top aide, sent thousands of emails to the private laptop she shared with husband Anthony Weiner, a.k.a. Carlos Danger, who is under FBI investigation for allegedly sexting with a 15-year-old girl.

The FBI has not yet reviewed Abedin’s emails, and they could turn out to be duplicates of those the FBI has already seen, benign, or not relevant to the investigation of Clinton.

“The stench of corruption is reaching Bhopal dimensions.”

But it does appear that Abedin misled the FBI when she told them all communications devices containing State Department work product were turned over to State when she departed in 2013.

Clinton, understandably, was stunned and outraged by Comey’s letter. For it casts a cloud of suspicion over her candidacy by raising the possibility that the FBI director could reverse his decision of July, and recommend her prosecution.

By Monday, Oct. 31, new problems had arisen, some potentially crippling or possibly lethal to a Clinton presidency.

Reporters have unearthed a near-mutiny inside the FBI over the decision to shut down the investigation of the Clinton email scandal and Comey’s recommendation of no prosecution.

Andrew McCabe, No. 2 at the FBI, has come under anonymous fire from inside the bureau as one of those most reluctant to pursue aggressively any investigations of the Clintons.

McCabe’s wife, in a 2015 state senate race in Virginia, received $475,000 in PAC contributions from Virginia Gov. Terry McAuliffe, a longtime friend and major fundraiser for Bill and Hillary Clinton.

After the Senate race that McCabe’s wife lost, he was promoted from No. 3 at the FBI to No. 2, where he has far more influence over decisions to investigate and recommend prosecution.

Justice Department higher-ups under Attorney General Loretta Lynch apparently disagreed with Comey notifying Congress, and the nation, to new developments in the email scandal. Yet Comey had given his word to Congress that he would do so.

In the Southern District of New York, which has jurisdiction over the Weiner sexting investigation, FBI agents have reportedly been blocked from opening an investigation into charges of corruption in the Clinton Foundation.

This follows revelations that corporate chiefs and foreign rulers and regimes, hit up for contributions to the Clinton Foundation, were then urged by an ex-Clinton aide to provide six-figure speaking fees for Bill Clinton.

This follows reports the Clinton Foundation took contributions for victims of natural disasters, and awarded multimillion-dollar contracts to contributors to do the work.

Still unanswered is what Bill Clinton and Attorney General Lynch discussed during that 30-minute meeting on the Phoenix tarmac, prior to the FBI and Justice Department decision not to indict Hillary Clinton.

The stench of corruption is reaching Bhopal dimensions.

What appears about to happen seems inevitable and predictable.