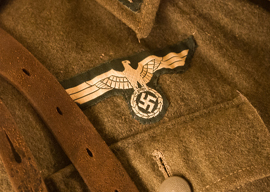 Robert Harris’ new novel, Munich, will be published in September. It’s too early to review it, but I’ve read a proof copy and can say it’s as intelligent and gripping as one has come to expect from Harris, while the depictions of Chamberlain and Hitler are brilliant. The novel also raises the question of army resistance to Hitler, something that critics of the Munich Agreement and elements in the German Foreign Office made much of after the war.

Was there indeed an army plot to arrest or even murder Hitler, and was this thwarted by the Munich Agreement?

Certainly some in the upper ranks of the army were very nervous in the autumn of 1938. They feared that Britain and France would stand by the Czechs; that this would make war inevitable (which was probably what Hitler wanted then); and that Germany would be defeated. So, the theory goes, they were ready to act against Hitler, but then the agreement made in Munich cut the ground from their feet by averting war that autumn.

It’s a tenable theory, but is it persuasive?

“Suppose there was indeed a plot, and Hitler had been arrested—even shot. What then?”

The Army commander-in chief, Field Marshal von Brauchitsch, interrogated after the war when he was being held in a British internment camp in Wales, would have none of it. “Why do people go on about this?” he said. “I knew nothing about it. Hitler was hugely popular. There is no way the Army would have acted against him.”

The field marshal was already a sick man; he would die a few months later. He was awaiting his trial on charges of war crimes. It might have been in his interest to claim there had been a plot, which the “success” of Munich and the avoidance of war that year rendered unnecessary. But “there is no way the army would have acted against him” sounds pretty conclusive.

There were reasons for not doing so, the first being the likely consequences if any plot misfired. Second, all the officers in the High Command had taken an oath of loyalty to the Führer, and this oath mattered to them. Third, “Prussian generals don’t mutiny.”

One can’t be certain, but there is one interesting scenario that, to my knowledge, has been insufficiently explored.

Suppose there was indeed a plot, and Hitler had been arrested—even shot. What then? The Nazi penetration of the state, the army, and society had gone deep, very deep, by 1938. There would surely have been resistance to any army coup—for a coup is what it would have been – resistance from the party and from the SS. Moreover, given that Hitler was indeed “hugely popular,” the public reaction would have been shock, disapproval, and the denunciation of the leaders of the coup as traitors. One should remember that even in 1944, when Germany was doomed to lose the war, those engaged in the July Plot were seen as traitors and continued to be branded as such by millions for years after the war. Hitler, if shot in 1938, would have been a martyr; if held in prison, there would have been a counterplot to free him and restore him to power.