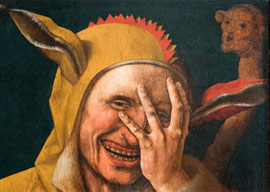 The best thing about being a modern academic is that you don’t have to know anything or prove anything—you simply need to have the right political opinions.

This makes it hilariously easy to hoodwink modern academics by regurgitating their postmodern gobbledygook right back in their maws in the most inane and appalling terms.

This was amply proved by a trio of pranksters, all of whom self-identify as leftists, who recently pushed seven hoax “academic” papers past peer reviewers and got them accepted. Four have been published; three were awaiting publication but got pulled after the Wall Street Journal launched an investigation when one of their reporters had the good sense to smell a rat in a paper alleging that public dog parks are “petri dishes for canine rape culture.”

The paper in question, “Human Reactions to Rape Culture and Queer Performativity in Urban Dog Parks in Portland, Oregon,” had been published in the feminist geography journal Gender, Place, and Culture. Using “black feminist criminology,” it argued that dog parks are “rape-condoning spaces” where owners will permit male dogs to hump female dogs but will always intervene in cases of male-on-male canine humping. This, of course, is evidence of misogyny and internalized homophobia:

Dog parks are microcosms where hegemonic masculinist norms governing queering behavior and compulsory heterosexuality can be observed in a cross-species environment.

The pranksters—Helen Pluckrose, James A. Lindsay, and Peter Boghossian—described their project as “an attempt to get absurdities and morally fashionable political ideas published as legitimate academic research.” But once the Wall Street Journal let the dog out of the bag, they abandoned the project and published their findings.

Other hoax papers they’d written and had published were “When the Joke Is on You: A Feminist Perspective on How Positionality Influences Satire,” which according to the authors “argues that social justice activists can make fun of others, but no one is allowed to make fun of social justice.” It was published by Hypatia, a leading feminist philosophy journal. More disturbingly, another paper they submitted to Hypatia argued that “privileged students shouldn’t be allowed to speak in class at all and should just listen and learn in silence.” It argued they would benefit from “sitting on the floor, wearing chains, or intentionally being spoken over,” as all these acts of ritual self-abasement would constitute “experiential reparations.” Hypatia’s reviewers didn’t reject the paper; they allegedly sent it back for a rewrite urging stricter treatment of “privileged” students.

“Progressive academia’s main thrust seems to be that so long as your heart is in the right place, it doesn’t matter if you’re brain-damaged.”

Another hockey puck these mischievous gnomes slipped right past the deconstructionist goalies was “Our Struggle is My Struggle: Solidarity Feminism as an Intersectional Reply to Neoliberal and Choice Feminism,” accepted by Affilia: Journal of Women and Social Work, which the pranksters describe as a “leading feminist social work journal.” They refer to this paper as their “Feminist Mein Kampf” and describe their “struggle” thusly:

The last two thirds of this paper is based upon a rewriting of roughly 3600 words of Chapter 12 of Volume 1 of Mein Kampf , by Adolf Hitler, though it diverges significantly from the original. This chapter is the one in which Hitler lays out in a multi-point plan which we partially reproduced why the Nazi Party is needed and what it requires of its members.

This past summer the journal Sexuality & Culture published the team’s “Going in Through the Back Door: Challenging Straight Male Homohysteria and Transphobia through Receptive Penetrative Sex Toy Use,” which posited that “it is suspicious that straight men rarely anally self-penetrate using sex toys, and that this is probably due to fear of being thought homosexual (‘homohysteria’) and bigotry against trans people (transphobia).” One of the paper’s reviewers sloppily gushed that “This article is an incredibly rich and exciting contribution to the study of sexuality and culture, and particularly the intersection between masculinity and anality.”
Perhaps my fave of the bunch is “Who Are They to Judge?: Overcoming Anthropometry and a Framework for Fat Bodybuilding,” published in April by Fat Studies. According to the paper’s abstract:

While fat activism has disrupted many dominant discourses that causally contribute to negative judgments about fat bodies, it has not yet penetrated the realm of competitive bodybuilding. The author introduces fat bodybuilding as a means of challenging the prevailing assumptions of maximally fat-exclusionary (sports) cultures while raising fundamental ontological questions about what it means to “build a body.” Specifically, he advocates for imagining a new classification within bodybuilding, termed fat bodybuilding, as a fat-inclusive politicized performance and a new culture to be embedded within bodybuilding.

This is not the first time that postmodern deconstructionist academia has been hoisted by its own retardation. There’s even an automated web page that will generate an aggressively idiotic postmodern “academic” paper every time you refresh the browser.

Perhaps the most famous example of getting absolute gibberish published so long as it blindly conformed to leftist sentiments was 1996’s so-called “Sokal Affair,” in which NYU physics professor Alan Sokal had an article published in pomo-pseudo-academic journal Social Text with the unwieldy title of “Transgressing the Boundaries: Towards a Transformative Hermeneutics of Quantum Gravity.”

Sokal’s paper referred to the “so-called scientific method,” announced that “it is becoming increasingly apparent that physical ‘reality’ [is] a social and linguistic construct,” and urged that “postmodern science [should] provide powerful support for the progressive political project.” It denied the very idea of objective reality: “an external world whose properties are independent of any individual human being [is] dogma imposed by the long post-Enlightenment hegemony over the Western intellectual outlook.”

Sokal said his hoax was designed to test his hunch that modern academic reviewers would “publish an article liberally salted with nonsense if (a) it sounded good and (b) it flattered the editors’ ideological preconceptions.”

His hunch was correct in the 1990s. It is more correct than ever now. Despite the five-dollar words and clunky, murky, tortured syntax, progressive academia’s main thrust seems to be that so long as your heart is in the right place, it doesn’t matter if you’re brain-damaged.