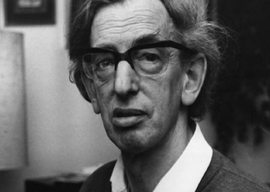 They played “The Internationale“ at Wednesday’s funeral of Eric Hobsbawm, Britain’s “greatest historian.” No one took offense. Indeed, all felt uplifted. The mourners at the crematorium in Golders Green, London’s Jewish heartland, included Labour Party leader Ed Miliband, who proclaimed Hobsbawm “an extraordinary historian” who “brought history out of the ivory tower and into people’s lives.”

Until his death at age 95 on October 1, Hobsbawm had remained a wide-eyed, barely repentant believer in the religion of world communism. Naturally, Britain and Europe’s most influential journalists and academics revered him. So on the day of his death, Britain’s BBC”the state broadcaster whose remit is to tell us the truth”interrupted everything to pay sickly sweet homage to the nation’s greatest communist.

Hobsbawm’s golden reputation is proof that communism did not die with the Soviet Union. It is also proof that if you defend communism, far from it being shameful, it remains laudable and even necessary”especially if you are a journalist or an academic keen to get ahead.

It’s indicative of who really calls the shots in Britain and Europe that to brand someone “a fascist” or “a Nazi” is an insult, but to call someone a “communist” is not, and that to deny the communist holocaust is allowed, but to deny the Nazi holocaust is not.

“There is one class war that really must be fought: The one to eliminate the chattering classes.”

Can we imagine what the PC (post-communist/politically correct) people who command European culture would have had to say if at the funeral of an academic who was an unrepentant apologist of National Socialism they played the “Horst Wessel Song“ as the flames devoured his corpse and the mourners felt uplifted? No politician would dare to attend. Arrests would be made.

Wrong, say the hordes of communist fellow travelers in the non-communist world, for this reason: Unlike the Nazi cause, the communist cause was justified because a property owner deserves to be eliminated, whereas a Jew does not.

But no decent human being can justify what was done during the 20th century in communism’s name.

Yet despite it all”despite the belated admissions about Soviet genocide after Stalin’s death in 1953, despite the Soviet invasions of Hungary and Czechoslovakia in 1956 and 1968, despite the fall of the Berlin Wall in 1989, et tout Ã§a“despite all that and so much more, Britain’s greatest historian could see no evil.

The genocides were either mistakes, you see, or mistakes that occurred behind his back. However regrettable, such mistakes did not matter because the end justified the means.

It is one thing to kill people in a war of survival as the Allies did; it’s quite another to kill them in cold blood as the communists did.

Unlike nearly everyone else, Britain’s “greatest” historian did not care because those genocides did not matter.