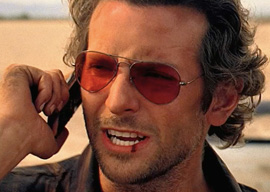 Bradley Cooper in The Hangover

At six foot nine, Kris Humphries may literally be the world’s biggest ass. This giant goober-faced fool is a basketball player who was briefly married to pneumatic Armenian reality-TV star Kim Kardashian. As a frequent guest on Keeping Up With the Kardashians, Humphries proved himself to be young, dumb, and full of cum. With his gruff voice and unpleasant attitude, he would often put others down and poke fun at the Kardashians. This nimrod has acted like a scorned little bitch ever since Kardashian dumped him after a 72-day marriage. One would think such a brief and fruitless union would be done and dusted without much fanfare. No such luck. The tabloids hint that this will be one hell of an acrimonious divorce. Humphries is making ridiculous demands and using the media to feed his bruised ego. Men who handle breakups this badly are pathetic. Word of advice, big guy: Let this go quietly and save what’s left of your dwindling public image.

“Parents who rarely say no to their kids are setting them up for trouble.”

Peter Facinelli, who plays a vampire on the Twilight series, has dumped his wife, Jennie Garth, after over a decade together. Garth’s chief claim to fame was the 1990s Aaron Spelling series Beverly Hills, 90210. When the couple first hooked up, she was more famous than Facinelli. Then he hit the big time with Twilight while she has remained in post-90210 obscurity along with her fellow cast mates. Though the divorce papers cite “irreconcilable differences,” some are blaming the split on his more recent popularity. The couple have three daughters together. Supposedly Garth didn”t want the divorce. Now she is bravely nursing her wounds with a new reality show where she and her daughters move to the country and play around on tractors. Maybe she”ll find a handsome farm hand to feed her flock.

Another short-lived romance has fizzled in Tinseltown. Fortunately Bradley Cooper and Zoe Saldana only dated for three months and didn”t end up dosed, hitched, and toothless in Vegas like in Cooper’s buddy flick The Hangover, though that would have been much funnier. Why do Cooper’s girlfriends seem to spend more time with his mom than with him? His last big relationship was with RenÃ©e Zellweger, and she was often photographed shopping with Coop’s mother. Saldana was also spotted recently with his mother. Isn”t it too soon to introduce your girlfriend to your mother after less than 90 days? Maybe he’s a mama’s boy or maybe his mother is just cooler than Cooper, but actors are weenies either way.