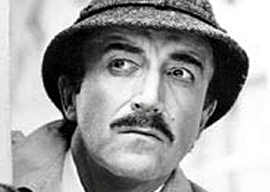 There’s a scene in the 1976 film The Pink Panther Strikes Again in which the nations of the world send their top assassins to eliminate Inspector Clouseau. One by one the assassins take their best shot, and time and again Clouseau survives (and the assassins die) due entirely to pure luck on the inspector’s part. That was the thing about Clouseau; unlike Sherlock Holmes, who would prevail through intelligence and skill, Clouseau could always be counted on to stumble out of danger and pratfall his way to victory. And the bad guys, no matter how smart they were, no matter how skilled, couldn”t beat him.

I”ll be frank; I still can”t decide whether Trump is Holmes or Clouseau. But the sonofabitch always wins, and his enemies always lose in spectacular fashion, and it’s making for a presidency that’s far more enjoyable to watch than any Hollywood movie.

Take last week. The press, which is fast proving to be the Chief Inspector Dreyfus to Trump’s Clouseau, began hammering the man hard over the plague of “neo-Nazi” and “white supremacist” bomb threats being phoned in to Jewish community centers. Trump condemned the threats (many Muslim leaders won”t even condemn the outright murder of Jews, and most “mainstream” journalists never insist that they do), but the press still wasn”t satisfied. And being the crafty scoop-meisters they are, reporters soon discovered that while Trump was publicly denouncing the telephonic Kristallnacht, he privately told a group of state attorneys general that the threats might not actually be from actual anti-Semites. He suggested that the threats might in fact be “the reverse”: someone looking “to make people”or to make others”look bad.” In other words, the threats might be coming from someone with an agenda that has nothing to do with wanting to blow up Jews.

You could almost hear the sound of every journalist in D.C. getting a hard-on. “We got him!” Trump the “conspiracy theorist.” Trump the “denier” who dares to suggest that the greatest threat to the Jewish people since Haman’s lottery might be nothing more than a hoax. Sure, Trump has not only survived but prevailed against every other supposedly fatal armor-chink and “smoking gun” his opponents have trotted out, but this one will surely sink him. The Jews are facing an existential threat, and Trump suggested it might be nothing more than a mischief-maker with a personal agenda.

“I have to tell you, I have no idea whether Trump is good or just lucky.”

And then an arrest was made in (at least) eight of those bomb threats, and it turned out to be…a mischief-maker with a personal agenda. If you listened hard enough, you could hear the sound of boners collapsing in newsrooms across the country. Trump had called it perfectly. It was no white supremacist, but Juan Thompson, a black dude, a leftist journalist with a grudge, who, exactly as Trump had speculated, phoned in the threats “to make people”or to make others”look bad.”

I have to tell you, I have no idea whether Trump is good or just lucky. Honestly, I just can”t decide. This denouement was too damn perfect. The hero turned out to be 100% right, and the villains, foiled again, had to slink away and eat their words. Is the hero of this story Clouseau or Holmes? I wish I could say. But what does it really matter, because the bad guys got their comeuppance, and in the end, isn”t that what makes an audience cheer?

Of course, since this is real life and the action doesn”t end when the credits roll, we got to witness how the villains in the press handled their latest humiliating defeat. And, as if I even have to say it, they handled it deceitfully. They had promised their audience white supremacists, and damned if they were going to deliver a black guy instead. So immediately some of the “truth tellers” in the media decided that “mad bomb threatener” Thompson was a man with no race. Remember, we”re talking about a bunch of leftist dunderheads who think a person’s gender is “assigned” at birth. So why not just “assign” Thompson the identity of a raceless man?

In 2015, when John Houser shot up a Louisiana movie theater, Yahoo News ran a story about the shooter, whose motives were as of then unknown. In the piece, Yahoo made it a point to stress that Houser was a “white male,” even though his race was not relevant (at that moment) to the story. When I emailed Yahoo News super-scooper Michael Walsh (not to be confused with National Review hack Michael Walsh ), he explained why race was included in the shooter’s description: “That article was originally titled “John Russell Houser: What we know about Louisiana movie theater shooting suspect,” and I wrote everything that we knew about him.”

So following the arrest of Juan Thompson, Yahoo News ran a piece titled “What to know about Juan Thompson.” Think race is mentioned even once? Of course not. After all, one article was titled “what we know,” the other “what to know.” And Thompson’s race is absolutely something you”re not supposed to know.

In a lengthy L.A. Times profile of Thompson, reporter Jaweed Kaleem also withheld any mention of Thompson’s race. Sure, that’s deceitful, but it’s also funny. Wanna know why? Kaleem is the Times“ “race and justice reporter.” Let that sink in. The race reporter failed to mention race. You had one job, Jaweed. Kaleem, a Pakistani Muslim (and really, who better to cover the Jewish beat?), refused multiple requests to explain why he made Thompson the man without a race.

And it wasn”t just Kaleem who clammed up after Trump was proved right. Before Thompson’s arrest, members of the press had tried to make Trump seem like a deranged conspiracy theorist by claiming that, at the attorneys general meeting, he”d called the bomb threats a “false flag.” The problem is, Trump hadn”t used the term “false flag,” but that didn”t stop journos from putting it in quotes anyway. I emailed more than two dozen prominent national reporters to ask why they chose to put “false flag” in quotes, and not a single one of them replied. There’s the modern American media in action, folks. You know, the responsible, accountable, totally not “the enemy of the people” media.