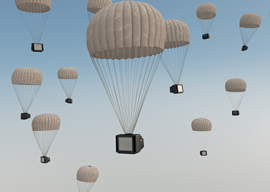 Two years ago, I penned a piece titled “Denial Is Dead.” The gist of it was that Holocaust denial is basically over. All of its leading intellectual proponents have abandoned the concept, and soon enough the whole idea of Holocaust denial will be relegated to the waste bin along with the temperance movement and Synanon.

Well, I was wrong. Holocaust denial ain’t dead. Oh, it’s brain-dead, but like the zombies in a George Romero film, it will not only survive but eventually claim the world.

To illustrate my point, I have to start by reaching back a bit. There’s a story I’ve kept in my pocket for a few years. I haven’t used it because I couldn’t think of an angle besides “Millennials are idiots.” And why would I want to waste my time stating the obvious? But what I first thought was a story about millennials recently turned into something a tad more significant.

A few years ago, Discovery, Inc. had a stellar idea. Let’s launch a hip online science channel for millennials! Yes, let’s create a network where the people who’ve been raised to believe that asthma inhalers can melt Antarctica and there are 387 genders (sorry, 388…just got the text update) can inform their peers about science.

This was an idea destined to succeed. Oh, wait, it failed, but c’mon…“failure” is just a phony trope used by us “grups” to keep the young people from winning.

The new channel was called TestTube, and one of the guys Discovery put in charge of it was Jules Suzdaltsev. Yes, that Jules Suzdaltsev (just kidding…I don’t expect anyone to know him). Suzdaltsev had it all—a B.A. in psychology from UCLA, lotsa digital media experience, and killer hipster glasses. And I mean really killer hipster glasses (buy those glasses, get a free Pomplamoose CD). Suzdaltsev recorded a video for TestTube TV called “Why Do People Still Deny the Holocaust?” The video (currently at nearly one million views) isn’t especially terrible. Or terribly informative. It’s just a condescending IPA drinker from Silver Lake reciting Wikipedia talking points. Suzdo has all the affectations (remember that word; we’ll be coming back to it) down pat, and he plays the part to the hilt: the smug, smarmy, know-it-all rational “man of science.”

“In a forum from which reason has been banished, the least reasonable side will win.”

The substance of the video is not wrongheaded. Holocaust denial is foul. And Suzdo does fine until the two-minute-sixteen mark, when things derail in spectacular fashion. He shows a photo of the steam autoclaves at Auschwitz-Birkenau. These were the small delousing facilities where racks of clothing were steamed to eliminate lice. No one—no one—has ever claimed that these were gas chambers for humans. Indeed, as is obvious from the photos (and for the record, I have walked through those autoclaves dozens of times), you could, at best, fit seven people in there (ten if you’re steaming midgets).

The buildings at Auschwitz that are claimed to have been the gas chambers are krema I at the Main Camp, kremas II, III, IV, and V at Birkenau, and the long-dismantled “farmhouses” outside Birkenau.

But not those damn autoclaves.

So, I emailed Suzdo. I identified myself, and I respectfully told him that he is actually furthering Holocaust denial by spreading a claim that is so demonstrably false (as every single Holocaust education institution and scholar identifies those autoclaves as being solely for delousing). Shaking his hipster glasses like Charles Nelson Reilly, Suzdaltsev replied, “As a matter of a fact, David, I had similar concerns about that photo but our media licensing source included that description. I spent a while trying to find a separate source to prove or disprove the caption but was unable. Would you mind linking me to some sort of trustworthy source for that photo or a similar photo of that object?”

He then added, “I wanted to ask you as a revisionist, to what end goal do you believe certain facts of the holocaust [sic] are misrepresented?”

His reply? “Unfortunately David, despite the strength of your convictions, neither you nor the websites you linked fulfill our editorial accuracy requirements, especially for revising a primary source description.” The most essential Holocaust education sites in the fucking world did not meet his standards, because he can’t admit being wrong, even in the face of overwhelming evidence. To him, the false caption on the photo from his “media licensing company” is a better “primary source” than the actual museum with the actual historians who oversee the actual buildings. To be clear, those historians can be wrong (who’d know that better than I?), but Suzdaltsev was not critiquing their historiography. He was essentially saying, “This caption from a photo licensing company is a more reliable source than the Auschwitz State Museum or Yad Vashem,” and that’s just asinine. It’s not that he lacks the comprehension skills to differentiate between a photo licensing service and a world-renowned museum; it’s that he chooses not to use them.

I finally bullied the nerd into adding an annotation to the video admitting that the gas chamber description is “disputed,” on the promise that if he did so, I’d leave him alone. I ended with a parting shot about how he had asked me “to what end goal do you believe certain facts of the holocaust are misrepresented,” and now he had answered his own question. It happens because pompous twerps make clumsy errors and then refuse to admit they’re wrong.

Okay, that was a couple of years ago. A couple of weeks ago, Ron Unz, proprietor of that popular far-right website that looks like a cut-and-paste ransom note assembled by a kidnapper with palsy, decided to publicly declare his undying love for Holocaust denial. His piece, which runs 500,000 words (okay, maybe a little less, but it feels like that many), was riddled with errors. Out of respect for a couple of friends who appear on the site, I emailed Unz, just as I’d done with Suzdaltsev, to calmly point out where he was wrong.

And just as with Suzdaltsev, what I got back was pure affectation. Instead of Suzdo’s “hipster intellectual” shtick, I got the standard denier’s “Hey, I’m just askin’ questions” routine. The “golly gosh aw shucks, I ain’t no highfalutin historian, just a lil’ ol’ guy tryin’ to get answers” vaudeville act. Some of our exchanges were downright hilarious. In his piece, Unz had said of David Irving: “His entire approach to controversial historical issues was to rely as much as possible upon hard documentary evidence, and his total inability to locate any such documents relating to the Holocaust drove Lipstadt and her fellow ethnic-activists into a frenzy of outrage.” I countered with “That’s a 100% complete lie, and if you run it by Irving himself, he’ll tell you so. Have you read Hitler’s War? It’s not a denial book. Have you read his Goebbels biography? It’s not a denial book, and it contains dozens of ‘documents relating to the Holocaust.’”

I pointed out that Irving had personally authenticated the March 27, 1942, passage in Goebbels’ diary in which he specifically stated that Odilo Globočnik (head of the Aktion Reinhard extermination program) was leading an operation that would result in the liquidation of 60% of Polish Jewry, via a “barbaric” method.

A diary passage that could not be more specific is dismissed as “vague” by someone so in love with his “gosh aw shucks I’m just askin’ questions” persona that he has no actual desire to learn the answers to those questions.

The back-and-forth was lengthy (you can view the entire mess here), and it followed a most tiresome pattern. I’d provide evidence countering his denial positions, and he would either ignore it or feign not understanding my point.

Following my “debate” with Unz, I started thinking about Suzdaltsev again. I had dismissed his obstinance as nothing more than a millennial being a millennial. But Unz is 56. The one common factor both men share is that they are creatures of the internet. It’s their life, their livelihood. And this is what the online age has brought about. People just don’t want to comprehend anymore. If anything, social media discourages comprehension. Information gets thrown at you too quickly to examine or understand what you see. So, you pick your persona (atheist man-of-science, humble Holocaust skeptic, anti-Trump resister, anti-government conspiracy guy, etc.), and you cherry-pick your facts. You spout off on Twitter, and move on to something else. Absent from all of this is any need to actually comprehend concepts and events.

Hell, look at the Las Vegas shooting. No one cares about comprehending it anymore…the motives, the mistakes, the many unanswered questions. We’ve all moved on. We had our say based on our persona (“ban guns!” “false flag!” “crisis actors!”) and we’re done with it.

I’d go so far as to say that what’s truly dead is the concept of the “slow news day,” not just because there’s a lot going on in the news at the moment (which is true, but that’s only half the story). The slow news day is dead because as we’ve surrendered our comprehension skills, we’ve lost the ability to tell important stories from trivial ones. Journalists know that on a day when Trump doesn’t tweet and no one shoots up a school, all they have to do is find an example of a white person saying “nigger,” and social media explodes like it’s the apocalypse.

All of this bodes poorly for a topic like the Holocaust, a significant story that requires comprehension skills to fully grasp. The dummies are going to win the day on this one. The dunderhead “rationalists” like Suzdaltsev, who hold to clumsy errors in spite of all facts and evidence, and the deniers like Unz, who use the other side’s errors to question the entire event. In a forum from which reason has been banished, the least reasonable side will win. That will be the deniers.

Social media CEOs can ban Holocaust denial all they want; it won’t make any difference, because social media culture is ensuring its eventual triumph. Funny enough, the underlying message of Romero’s original Dawn of the Dead was that the zombie epidemic only overtook the world because people refused to use reason when the dead first started to rise.

I usually find it amusing when life imitates art…but in this instance, there’s little to smile about.