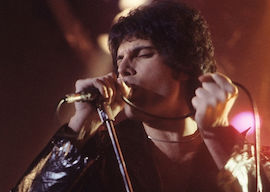 Bohemian Rhapsody is a crowd-pleasing biopic about the life and sadly early death of Queen’s singer Freddie Mercury (1946–1991) that subversively depicts the roots of the AIDS epidemic. Rather than portray Mercury in the now-traditional manner—as a martyr to Ronald and Nancy Reagan’s homophobia—the film instead reflects his straight bandmates’ view of him as a vast talent who was allowed to ruin his health by the debauchery of the Gay Liberation era that never denied him whatever self-indulgence he craved.

Of course, his contemporaries had good reason to treat Mercury as someone special. In the judgment of the Who’s Roger Daltrey, Freddie was the most virtuosic of all rock singers, an extraordinary vocal acrobat. (Personally, I didn’t particularly enjoy his tone, but his skill at vocal ornamentation was unworldly.)

As a live performer, I’d rank him in the top dozen rock-star frontmen I saw in the 1970s and 1980s, but perhaps not quite in the top rank (say, Strummer, Springsteen, Byrne, Bono, Petty, Prince, Jagger, Hynde, and Davies). When I went to a Queen concert in 1977, however, Mercury was suffering from vocal nodes, the kind of opera-diva problem that doesn’t make the news when suffered by lesser singers.

In an album rock era, Queen’s eclecticism made them a great singles band, the successors to Three Dog Night. But the combination of three straight instrumentalists with high IQs (guitar god Dr. Brian May earned his astrophysics Ph.D. in 2007), the English equivalent of Rush, and one gay pianist/genius singer did not make for a cohesive artistic identity. Compare May’s hockey-arena stomper “We Will Rock You” with Mercury’s Studio 54 ode to cocaine and sodomy “Don’t Stop Me Now.”

Freddie Mercury, born Farrokh Bulsara in Zanzibar, was a Parsi. The Parsis are Zoroastrian Persians who fled the Muslim rule of their homeland for Bombay, where they eventually became the British Empire’s favorite pets, prospering under Victorian bourgeois capitalism. (Two Parsis were elected to the British Parliament to represent London in the 1890s.)

Malek’s performance is universally being praised. And he is an impressive performer (although the movie uses Mercury’s original vocals). Still, Malek, who is 5’7″ and perhaps 130 pounds with the angular cheekbones of a 1970s glam rock star, is better suited physically to star in a Mick Jagger biopic. I was surprised to learn that the real Freddie was not much over 5’9″ because he contrived to look like a six-footer on stage. The singer also had broader shoulders than the actor.

Freddie was a genetic freak, as he explains to May and drummer Roger Taylor when volunteering to lead their band: “I was born with four more incisors. More space in my mouth, and more range.” His overbite wasn’t a disastrous problem to Mercury’s looks because he possessed a formidable lower jaw, making him slightly resemble Tim Curry’s Dr. Frank-N-Furter in The Rocky Horror Picture Show.

In the movie, though, the more delicate-looking Rami, with his sad-sack rheumy eyes, is largely defeated by the prosthetic overbite he’s given, at least until his character grows a stereotypically gay mustache that distracts from his mutant teeth.

His straight bandmates in the movie sardonically remark upon how similar Freddie now appears to the other gays hovering around him during the Castro Clone era of the early 1980s when every gay man on the prowl had to have short hair, a close shave, and a big mustache like the policeman in the Village People. Mercury’s mustache always seemed wrong: An artist of unique talents should not have submitted himself to a fashion fad intended to facilitate industrial-scale anonymous sex.

Mercury saw himself not as a pathetic victim of society but as a predatory Homo superior. How many men he might have infected with HIV is of course never discussed in all the hagiography about Mercury.

Executive producers May and Taylor exerted more than a little control over the movie due to their hold on music rights. They make sure they are portrayed as normal, upright blokes with wives, kids, and levelheaded attitudes, who had to put up with a lot of guff from Freddie.

Although the movie opened to an impressive $50 million first weekend in North America, and will likely wind up the second-highest-grossing musical biopic ever, behind only Straight Outta Compton, critical reaction has been cold.

One reason is the movie’s lack of interest in fashionable clichés about the inhuman homophobia of the bad old days. Mercury’s conservative Parsi parents are portrayed as hoping he would settle down with his pretty blond girlfriend of 1970–1976 and provide them with an heir: Their dreams were an inconvenience for Freddie, certainly, but hardly a hateful hope.

Another reason that a movie about Queen isn’t satisfying critics today is because the band wasn’t all that satisfying to critics then, either.

Queen were largely seen as a talented ensemble that would sell out to sell out stadiums. Freddie Mercury’s AIDS death has since elevated them in the mythos without fundamentally changing their music, which was always a little too heterogeneous.

When I was about to move to Chicago in October 1982, I first hauled my less favorite albums to a West L.A. used-record store. The supercilious clerk, like Jack Black in High Fidelity, tried to shame me into keeping my copy of James Brown’s Live at the Apollo. But he not only refused to pay me for any of my Queen records, he was offended when I offered to give them to his store.

Queen came back more in fashion with a fine set at the 1985 Live Aid benefit for starving Ethiopians, which provides the climax of the film.

Freddie’s reticence in interviews is usually attributed to his trying to cover up his gayness (although if that were really a priority for him, he probably shouldn’t have named the band “Queen”). But it’s possible he was also cautious about talking to journalists for fear of saying something politically incorrect.

Freddie and his family had had to flee Zanzibar’s bloody 1964 black-power revolution, so perhaps he had personal reasons for not giving a damn about the racial obsessions of the age. For example, Bob Geldof almost didn’t invite Queen to Live Aid because in 1984 they’d violated the U.N.’s boycott of apartheid South Africa by playing Sun City.

The movie inevitably revives an old question: What proportion of rock stars, especially during the 1970s glamour-rock era, were gay?

When I was in junior high school, it was widely assumed that the percentage was high. For example, the Kinks’ 1971 hit “Lola” sounded autobiographical. On the other hand, the next I’d heard, Ray Davies’ wife was divorcing him because he’d knocked up Chrissie Hynde of the Pretenders.

Being a rock star was a good gig for artistic guys who are not macho but who still want to get girls.

The AIDS era came and went with Mercury as the only major casualty among rock stars. In contrast, dance, fashion, and figure skating were devastated.

One interesting pattern is that major gay rock stars, such as Mercury, Elton John, and Little Richard, are more likely to be pianists than electric guitarists. The weapon-shaped and aggressive-sounding electric guitar was the most masculine musical instrument ever.

It’s not unreasonable to speculate that the dominance of Anglo-American guitar rock during Mercury’s lifetime may have limited his accomplishments, that he really deserved a Puccini composing for his exceptional vocal instrument. Freddie’s six-minute mock opera “Bohemian Rhapsody” is of course wonderful, the ripest fruit of the richest decade of rock, but then again, Caruso didn’t have to compose his own stuff.