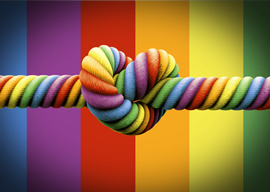 Last Friday proved a more eventful one than usual in New Zealand: on top of the usual weekend hustle, the Kiwi nation hosted the wedding of one Travis McIntosh to his partner, Matt McCormick. As it took place at the hallowed rugby venue of Eden Park, the union attracted a fair bit of attention from the national press, as well as the customary curiosity of queer advocates.

Sounds like your modern run-of-the mill gay wedding ceremony if one subtracts the disproportionate fanfare, right?

You”d be forgiven for thinking so at first glance.

Apart from, and above, the matter of the venerated venue, another aspect of the event distinguished it from others of its ilk: whilst Messrs. McIntosh and McCormick do indeed share similar genitalia, the only balls they express any interest in are those scrummed over by the athletes frequenting their selected spot. With a professed preference for females rather than fellas, the best-friend duo tied the knot as part of a radio competition for tickets to next year’s Rugby World Cup, here in Blighty.

“Seeing the two sides united in matrimonial myopia proves quite the spectacle: I”d call for a toast, were I of similar viewpoint.”

In short, this union reads like a case of all rugger, no bugger: a factor which had the aforementioned queer advocacy groups flinging condemnations, instead of confetti, at the pair. In a frankly amusing backlash, various LGBT larynxes let forth their lamentations, castigating the couple for sticking rings on each other’s fingers without wanting to stick fingers in each other’s rings. MP Louisa Wall”a prominent name in Kiwi “marriage equality” circles”labeled this rather heterodox example of homogamy “a mockery of the institution of marriage,” going on to call it a “foolish” and “disrespectful” diminishment of “the status marriage has in our society.” Her ire found echo in the words of another marriage-equality bigwig, Aussie MP Alex Greenwich:

Gay and lesbian people are fighting for the right to marry in Australia and have been fighting for the right in New Zealand, and it’s because they take marriage extremely seriously, and the commitments and responsibilities that come with that. Here are two straight guys making a joke of that, and that’s deeply concerning.

Not wanting to miss out on the blanket party, Joseph Habgood”Aotearoa Wellington’s cochairman for Legalise Love”cited the event as a setback in the same-sex struggle:

Maybe on the day that statistics around mental health for LGBTI (lesbian, gay, bisexual, transgender and intersex) people are better, when high schools are safe places for LGBTI youth, we can look back on all this and laugh. But competitions like this don”t bring that day any closer.

But my hands-down favorite response has to be that of Shelley Argent, spokeswoman for Parents and Friends of Lesbians and Gays, who, in a clear spirit of tolerance and goodwill, purred forth this catty little number:

This is two straight men who have done a wonderful job of trivialising marriage on their own. I hope it takes them quite a while to get the marriage annulled.

The spectacle of these same-sex marriage advocates throwing tantrums over the supposed sanctity of marriage leaves me with a sense of dÃ©jÃ  vu: from whom have I heard such bleating before? Perhaps Bob McCoskrie, president of Kiwi socon group Family First, can clarify matters:

This competition makes a mockery of marriage, but so did the redefining of marriage.

The ironic part is that supporters of redefining marriage argued for so-called equality and argued that everyone should have the right to marry whoever they wanted. What they didn”t understand is that when you redefine and move marriage away from its proper intent and purpose, these types of stunts will become more and more common.

Whoomp! There it is. Seems that the rhetoric of the self-appointed tolerance tsars doesn”t differ all that much from that of their ostensible opposition; not content with securing the right to marry for their interest group, these LGBT activists also wish to arrogate the moralistic myopia needed to “define” the union for all who would participate. No doubt the New Zealand “family values” flock employed similar assertions a year ago, in their efforts to keep those darned queerosexuals from defiling their “sacred institution.”