Hoover Was a Homo 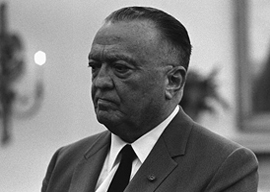 The title of this piece is both offensive and untrue, which has not dissuaded Hollywood from making a feature film based on this very premise.

In the almost forty years since his passing, the antisocial, anti-American, and anti-Western forces which seek to undermine civilization have never quite forgotten about the FBI director. Any time his name is mentioned it must always be accompanied by claims he was a homosexual, accusations that he persecuted Dr. Martin Luther King, Jr., and allegations of paranoia over subversives.

Now comes Hollywood’s attempt to ingrain in the media generation its mendacious image of the man. Because many actually believe that what they view on the silver screen is the authentic granite of history, it is time to set the record straight. What better way than by running down the crime blotter of charges?

Hoover first became involved in national security with investigations of anarchists. He maintained the pursuit throughout WWI and continued into the 1930s with regard to enemy infiltration. During WWII when U-boats set Nazi saboteurs in Florida and Long Island, it was the director who rounded them up.

Even before the second war the FBI engaged in operations to establish that massive Soviet infiltration had already occurred. While it has long been en vogue to deprecate such efforts, each year more evidence comes to light proving Hoover and those sharing his viewpoint correctly assessed the political power structure as enormously compromised.

“The exact people who claim to embrace all aspects of sexuality are the very ones frequently hurling accusations of homosexuality as ridicule.”

These were far from “witch hunts” on innocents. Assistant Secretary of State Adolf Berle provided President Roosevelt a list of communists in government by way of Whittaker Chambers, defected party member. Roosevelt laughed it off. Thankfully, Hoover was up to the task of defending the nation even if our commander-in-chief was not.

When he later gave evidence to the president that Soviet communists were engaged in espionage from their Washington Embassy, Roosevelt betrayed his country once more by not only refusing to act but sending his advisor Harry Hopkins to inform the Soviets their telephones were tapped. Henceforth, the director increased his efforts in vigilance against enemies both foreign and domestic.

Even with preventive action, eventual consequences of anti-American penetration were the downing of the U-2 over Soviet Russia, the loss of mainland China to communism, and the even more disastrous theft of American nuclear secrets. If anything, the director was too lenient on known subversives in government directly responsible for massive intelligence seizures of an almost incalculable cost, many with consequences still being felt.

It is well known the director recorded King on numerous occasions. Less well known is that King had lengthy and tangible ties with both the Communist Party and Marxist organizations.