Hoping Against Hope in Detroit 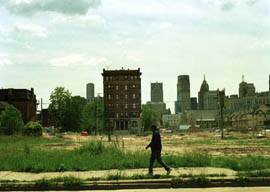 Watch out, Motor City. The “I”m a Believer” campaign is ready to bombard your crushed, rusted, rotting infrastructure with billboards, ads, and a logo apparently designed by someone who used to make T-shirts for The Clash.

The campaign’s message, forged in undoubtedly sweaty all-night brainstorming sessions by a decidedly un-Detroitlike marketing firm, is simple: They “believe” in Detroit. Beyond some vague admonitions to stop saying bad things about the city and to start saying nice things about it, and besides some empty bullshit about volunteer work and urban gardening, the campaign’s details are extremely sketchy. But they want to make one thing clear: They are absolutely fed-up with the jokes and putdowns and snide remarks and overall bad rap the city gets, and they”re going to stand together, suspend disbelief, and declare themselves believers.

“I, too, believe in Detroit. I believe that it is a metropolitan area of roughly 139 square miles situated on the Detroit River.”

I”m standing with them. I, too, believe in Detroit. I believe that it is a metropolitan area of roughly 139 square miles situated on the Detroit River. I also believe that facts are more helpful than empty rhetoric, especially when you”re trying to lure investors, so I”ve compiled some basic facts about the city. What do the facts say about crime, housing, employment, education, and government in the city that bequeathed us so many gosh-darned great dance records during the mid-1960s?

CRIME
Last year, a CNN survey selected Detroit as one of the world’s most dangerous cities. Since 1950, Detroit’s homicide and robbery rates increased by about 600 percent. The average teenage male in Detroit is likelier to wind up in prison than to graduate high school. Over the past few decades, Detroit has perennially snatched the crown as the nation’s murder capital, arson mecca, or its overall most dangerous metropolis. It rarely seems to fall out of the top three in any of these categories. Its homicide rate is typically five to six times the national average. A recent investigation revealed the city systematically under-reports violent crime”and STILL shows up at or near the top of every list. The city is also said to have the nation’s highest rate of police suicides. Things are so bad that in 2010, Mayor Dave “The Believer” Bing’s GMC Yukon was stolen. A few days later, Detroit thieves stripped a visiting Reverend Jesse Jackson’s SUV of its wheels.

HOUSING
Detroit used to be known as “The City of Homeowners,” but now a third of its housing units are said to be vacant. Even the dead are leaving Detroit in record numbers. In 2009, the city’s average residential unit sold for $12,439, down from nearly $100,000 in 2003. Thousands of buildings were destroyed in Detroit’s cataclysmic 1967 riots, thousands more have been burned down during the annual pre-Halloween “Devil’s Night” arson fest, and the rest were either neglected or abandoned. Huge swaths of the town represent a post-nuclear nightmare that has spawned a photographic subgenre known as “ruin porn.” An estimated one-quarter of the city’s entire land mass is now abandoned and reverting back to nature, overgrown with rats and weeds but probably too toxin-drenched from industrial sludge to ever sustain farming. Detroiters refer to such literal urban jungles as “feral” areas.

EMPLOYMENT
Several decades ago the city was said to have boasted the nation’s highest median household income; these days, it’s close to dead last. Detroit has the highest unemployment rate of any major American metropolitan area. Official city unemployment is around 29 percent; unofficially, it’s said to be 50 to 60 percent. Much of the blame is placed on the auto industry’s decline. Then again, there are no steel mills left in Pittsburgh and not so many meatpacking plants remain in Chicago, yet neither city’s economy is nearly so lifeless as Detroit’s.