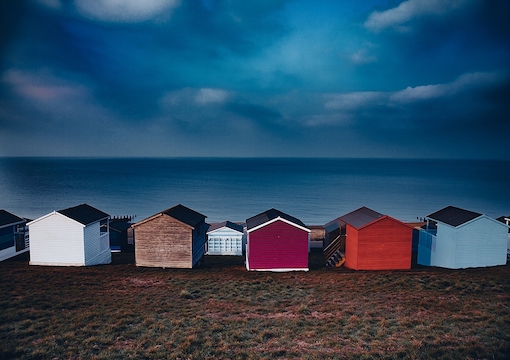 Britain’s worsening immigration crisis is actually two crises for the price of one. The first concerns the U.K. government and optics, a weaselly little word I first heard used by Obama when he was caught by the media playing golf during some national crisis. “The optics,” he said, “were not good on that one.” The British Conservative Party—many of whom are the equivalent of the infamous RINOs, Republicans in Name Only, in the U.S.—have been talking tough on immigration throughout their dozen-year incumbency, but net migration this year is half a million on the wrong side of the ledger. Eventually, in a country that is already the seventh-most populated in the world, folks notice.

And so the second, and very real (what the media have taken to calling “existential”), crisis is faced by those very folk, the indigenous unfortunates already living in Britain, and England in particular. Over 200 hotels throughout the U.K. have now been requisitioned by the state to house illegal immigrants, with canceled bookings and weddings now standard procedure, and local populations left unnerved and uninformed. Tearful staff are fired and replaced with immigration officials. One town with a population of around 700 was told to expect 1,000 new and diverse neighbors. This is a bit more than fifty Venezuelans on a day trip to Martha’s Vineyard, and having met Venezuelans stranded here in Costa Rica en route to the US of A, I can tell you that you would rather have neighbors from Caracas than Tyrana, capital of Albania.

Albania is about as close to a failed state as it gets. In 1997, a combination of Ponzi schemes, money laundering, and arms trafficking led to up to two-thirds of the population losing investment money. Now it is payback time for the failure of this violent, corrupt, and dim-witted nation. Sadly, it is not the Albanians who will be out of pocket, but the British taxpaying public. More, the U.K. has proposed to pay money to Albania in order to give it a lick of paint so that, it is laughably assumed, its detritus will want to shelve their English plans and stay home.

“The British government has ensured that you can check in anytime you like, but you never have to leave.”

Just as older Brits reached for their atlases (and the youngsters asked Siri) to find Ukraine when Putin made his move, so too Albania was a mystery until recently. This coastal country lies a short hop across the Adriatic from Italy, and borders Greece, North Macedonia, Kosovo, and Montenegro. So now you know. The population is, at the time of writing, a little shy of 3 million. Impressive, given that 40 percent of Albanians have left since 1990, and 2 percent of the adult male population have moved to the U.K. this year.

It is estimated that up to 80 percent of illegal immigrants entering England via the beaches of Kent are Albanian, and, to quote from a Mr. Trump, they are not sending their best. Actually, that is not strictly true. They are sending leading practitioners of two staple industries of Albania: drug-dealing and prostitution. Many Albanians entering England—this is not a British problem—are pushers and pimps, often fresh from jail in their home country. This is evinced by the jail tattoos and haircuts sported by fighting-age men who have calculated they will earn more money and evade justice more easily in London than in Tyrana, and be put up in top-quality accommodations. Welcome to the hotel Albania, where the British government has ensured that you can check in anytime you like, but you never have to leave.

Albanian immigrants have been fully briefed, of course. “No, Alteo. You don’t tell them you are gangster. You tell them you are gay.” Troublesome passports and worrisome, data-bearing cell phones are ditched into the English Channel, and the new arrivals set foot in England’s green and pleasant land with nothing except possibly diphtheria, markedly on the rise and traced to detention centers holding Albanians. Also, to ease their transit, people traffickers have been posting on social media with all the instructions for a new life on the British taxpayer’s ticket. Travel brochures are old-fashioned, and the Albanian traffickers keep up with the times, using TikTok to advertise their services.

And Albanians are no slouches when it comes to the power of language west of the Balkans. When Home Secretary Suella Braverman described the influx as an “invasion,” the outrage machine got into gear. Albanian premier Edi Rama (Albania is almost two-thirds Muslim, to add to its attractive qualities) claimed that his countrymen are being scapegoated. He also suggests that more visas for Albanians would improve matters. Yes, for Albanians.

So it was that 1,500 or so Albanians were able to march through London protesting Braverman’s entirely apposite term to describe them, and mark their territory by defacing a statue of Sir Winston Churchill with the fascistic-looking Albanian flag. Churchill, of course, famously declaimed that Britons, when faced with invaders, would “fight them on the beaches,” meaning specifically the same Kent beaches that welcomed home the troops liberated from Dunkirk in 1944. How cruel history is. A property company, Serco, currently making millions from leasing hotels and boardinghouses to the government to house illegal immigrants, is owned by Rupert Soames, Churchill’s grandson, who has vowed to welcome them on the beaches.

The U.K. is running out of four-star hotels, and so new arrivals are being upgraded to five-star accommodations. This is not enough for some, however, who have complaints about the food. It is so inconvenient to a hotelier when an illegal immigrant with no documentation is also a gourmand.

Robert Jenrick, a U.K. Immigration Minister, proposes solving the problem of what he wittily calls “Hotel Britain” by relocating the illegal immigrants to holiday camps and cruise ships. This is breathtakingly callous. Holiday camps are where people who can’t afford hotels in the first place take their breaks, so that hurts the poor, while cruises are linked primarily with retirement, so that affects the elderly.

The problems will begin when pushback starts. Come the assaults, rapes, and murders that inevitably accompany Albanian newcomers, the first sign of a vigilante response will see Britain’s police tear themselves away from the latest pride march to start cracking heads should anyone really decide to fight them on the beaches.

Welcome to the Hotel Albania. Such a lovely place.