Houston, We Have a Gender-Blind Public-Restroom Problem 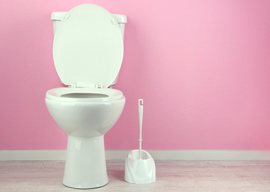 Full disclosure: I am neither a Christian nor a lesbian. Still, I doubt that Sam Houston would have given a man who claimed to be a woman the key to his outhouse.

Annise Parker, the openly lesbian mayor of the nation’s fourth-largest city, is currently locking horns with Christian pastors who oppose an “equal rights” bill that allows Houstonians to file discrimination complaints if they were barred entrance to public restrooms that matched their “gender identity” should it conflict with their biological gender. In other words, if a biological male claims he’s a woman and is forbidden to use the ladies” bathroom at Starbucks to piss away his Pumpkin Spice Latte, it is a human-rights issue rather than a case of an annoying drama queen with nothing better to do.

Back in June, the Houston City Council voted 11-6 to pass “HERO” (Houston Equal Rights Ordinance), otherwise known as the “Bathroom Bill.” The ordinance covers much more than the alleged right to unisex bathrooms, but it was that niggling stipulation that caused Christian fundies to aver that it would allow slimy male sexual predators to infest ladies” rooms under false pretenses.

“It’s almost as if Joseph Stalin and Sappho decided to put their differences aside and have a baby.”

That doesn”t seem entirely unreasonable, does it? Come to think of it, aren”t lesbians always trying to protect women from men? Why would these canyon-yodelers want hairy, disgusting males stinking up women’s bathrooms by flashing their wee-wees, anyway? Oh, right”because they”re not really men as long as they don”t believe they are, and to claim anything to the contrary makes one a bigot. I”ll tell you, they make it so hard to keep up with their ever-swelling definition of what constitutes “hate,” it’s hard not to hate them. They keep revising the script more often than my iPhone gets software updates.

With the sort of righteous, molten-hot fury stereotypically assigned to Texas Christians, local believers mounted a petition campaign to place HERO as a ballot referendum for November. They needed 17,269 signatures to get it on the ballot; they claim they gathered over 50,000. A city secretary allegedly stopped counting signatures shortly after the bare minimum was reached. But then stepped in sour-pussed City Attorney David Feldman to disqualify enough signatures to declare the petition null and void.

Petition supporters then filed a lawsuit to protest Feldman’s rejection of what they claim were valid signatures. Upping the ante considerably, the City of Houston then filed a subpoena request as broad as the Gulf of Mexico. It requested a staggering array of information from five local pastors, none of whom were mentioned in the lawsuit against the city. With a level of intrusiveness that would make NSA officials blush, the subpoena demanded that the beleaguered disciples of Christ turn over

All speeches, presentations, or sermons related to HERO, the Petition, Mayor Annise Parker, homosexuals, or gender identity prepared by, delivered by, revised by, or approved by you or in your possession.

Facing a public outcry regarding what seemed like governmental overreach”or even a forced and unlubricated reacharound”Feldman and Parker initially stood firm. “If the 5 pastors used pulpits for politics, their sermons are fair game,” the sensible-shoe-wearing mayor tweeted.

When the story went national last week, Feldman backed down a half-inch and filed a motion to revise the subpoena’s wording to remove the word “sermons” and downplay the jargon about “gender identity.”