How Can THAT WOMAN Know Anything? 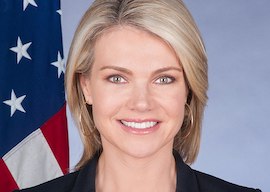 (For those of you just tuning in, I don’t defame the reputations of real reporters and newsmen with the froufrou French word. I’m only talking about the posers.)

As I say, the journalistes are furious. They’re furious because Trump has nominated that woman, that unqualified amateur, to be Ambassador to the United Nations.

Why are they furious?

Because she’s a reporter. A newswoman. One of them.

But she has no foreign-policy experience!

She has the experience of listening to every form of foreign-policy analysis—also called Educated Guess Bullshit—for the past twenty years as a reporter, correspondent, presenter, anchor, and commentator who presumably, like most of us, gets up every morning and reads three or four newspapers, checks seven or eight newsfeeds, and keeps some kind of news channel running in the background of her daily life. If anything, we have too much knowledge. She’s also spent the past two years as a public-affairs spokesperson and Under Secretary at the State Department. She got along with Tillerson and she got along with Pompeo. She’s been part of the inner circle during both regimes. Her security clearance may not be as high as Jared Kushner’s, but then, whose is?

Let’s start with the job description. What does the U.N. ambassador actually do, day after day, in the Turtle Bay corridors of the United Nations?

Numero Uno: You tell people what the United States’ position is. This used to be the easy part, but with Trump you need to have tweet alarms on your phone. She already has vast experience in this department.

Numero Two-o: You listen to what other countries say their position is. She’s been holding a microphone in her hand and sticking it in people’s faces for two decades.

Who better to do this job than any reporter, since, after two decades in the job, you start to realize that everyone is lying, at least a little bit, if only around the edges.

So let’s take a look at Heather Nauert’s résumé to see if she’s qualified for that job description.

Daughter of an insurance executive. (Accustomed to capitalism, check.)

Three brothers. (Tough. Can talk back to any male aggression, even when outnumbered.)

Attended the Keith School. (High academic standards, college prep, all the broad classical training that we’re told diplomats should have.)

Spent some undergraduate years at Pine Manor College in Boston, back when it was female-only. (Pure dee East Coast liberal arts—once again, what you’re supposed to take if you wanna enter the foreign service.)

Did some coursework at Arizona State. (Horace Greeley credits for going west.)

Took her B.A. at Mount Vernon College for Women in Washington, D.C., which specialized, at the time, in government, international relations, and fine arts. (Sorry about the fine-arts part, but U.N. ambassadors do occasionally have to head over to the West Side for cultural events at the Metropolitan Opera House.)

Masters in Journalism from Columbia University. (One of the two most acclaimed journalism schools in the country, but more important—finishing up in the Ivy League, the gold standard for Washington appointments.)

There’s actually one other possible reason for the press corps’ almost universal disapproval of Nauert. Since she was born in 1970, she’s precisely the right age to be one of the Heathers in Heathers, the 1988 cult movie about a high school terrorized by a clique of popular but cruel girls named Heather. She’s even got the shoes and the hair. What if that disarming smile masks a secret plot to humiliate the frumpy overweight ambassadors with cruel pranks?

As my first managing editor once said to me, “Reporting is three things. Can you get somebody on the phone? Can you ask them a question in such a way that they want to answer you? And can you act like you believe them when they lie to you so they’ll lie some more?”

Yeah, I think she can do that.

This means she can’t be intimidated and she can’t be out-talked. The U.N. is all about the talking. She’s got that down. Confirm the lady.