How Do You Solve a Problem Like a MAGA? 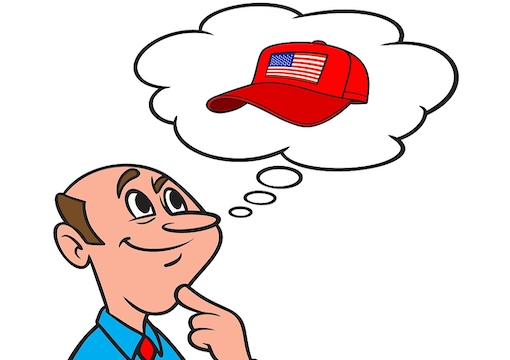 Two weeks ago I’m walkin’ through Century City, the business, residential, and dining district adjoining Beverly Hills. This is familiar territory to me; it’s home. So I know—

Wait a minute…isn’t that the exact same opening as my Dec. 8 column? What gives? 2021 is only three weeks old, and already I’m in reruns?

In that December column, I recounted how my daily jaunt through my beloved Century City was interrupted by a bus full of angry BLMs. And on Jan. 3, Century City was invaded again…this time by MAGAs. And though I’m reluctant to admit it, the BLMs were better-behaved.

I so hated having to write that. But it’s true.

Some backstory: In the months leading up to the November election, a group of highly energetic MAGAs held weekend pro-Trump rallies and marches at a park in Beverly Hills. The rallies were big, joyful, and boisterous; local motorists honked and cheered in support as they passed. I attended several of the events and, even though rallies in general are not my scene, I was proud of the unashamed redness in my city.

A few Antifas would occasionally show up to cause trouble, but they were always outnumbered, and the BHPD expertly kept the peace.

And then Nov. 3 came. And went. The Beverly Hills MAGAs tried to keep the rallies going for the rest of the year. After all, Trump, Giuliani, Lin Wood, Sydney Powell, and others promised that it was just a matter of time before the voter fraud would be exposed and Trump declared the rightful victor.

Weekend after weekend, the Vladimirs and Estragons returned to the park, waiting for kraken. Sadly, MAGA held its breath in anticipation for so long, oxygen deprivation lowered its IQ to that of its foes.

With the new year, something just…snapped. And the Beverly Hills MAGAs went bonkers. On Jan. 3 they descended upon the Century City mall and a nearby grocery store in an “anti-mask” protest. They harassed shoppers, yelled at employees, got into fights, called everyone a “Nazi,” and basically made themselves a pain in the ass to ordinary folks who were just trying to buy food. No need to take my word for it; the Beverly Hills Courier’s Sam Braslow collected a dozen videos of the day’s events.

These MAGAs had become indistinguishable from the people they used to mock. The morbidly obese “patriot” seen here trying to ram a customer with a shopping cart in the frozen-food aisle only to (at the end of the clip) start shrieking like a banshee might as well be “Trigglypuff” or any of the 2016 primal-screaming, despondent Hillary supporters. And when she starts looking for “muscle” to physically strike the customer for her, she might as well be Melissa Click.

Good thing the left can’t meme, because that fat-ass raging bull shopping cart clip would make a fine one.

Now, my obvious question is, what was gained from the grocery-store and mall incursions? California’s lockdown rules are indeed illogical, inconsistent, oppressive, ineffective, and economically devastating; I’ve been opposing them since March. But why pick on shoppers and merchants? Why invade private businesses? How does that help?

“With the new year, something just…snapped. And the Beverly Hills MAGAs went bonkers.”

To anyone grounded in reality, it obviously doesn’t help. But that “grounded” thing is proving troublesome. Many of these local MAGAs are die-hard QAnon and Lin Wood acolytes. What seems illogical to me is completely logical within their mental schema.

I felt a terrible sense of foreboding after that scene on the 3rd, and appropriately so. As the Courier’s Braslow reported, some of those Century City protesters were in D.C. three days later, at least one of them as an active participant in the Capitol storming.

And then on the 10th, the protesters were back again at Century City, MAGA hats and all, demanding maskless entry into private businesses. The cops tried to explain the concept of private property, but the MAGAs countered that Lin Wood had assured them that the notion of private property rights is just satanic pedo disinformation. When the protesters were told that the mall could set its own codes of conduct, one MAGA, with that look of cocky pseudo-certainty that’s become the default “resting MAGA face,” replied, “Lin Wood says that’s not true,” while the lead MAGA added, “This is what happened in Nazi Germany.”

Thankfully, this time the MAGAs stayed out of the grocery store, and there were no scuffles. But when the cops—displaying admirable patience—finally forced them to leave the mall, patrons applauded as they were escorted out. Shoppers lined the upper tiers to cheer the removal, while below a MAGA complained that “this is like gestapo stuff.”

That group of Trumpers had gone from eliciting honks of support and upturned thumbs from locals back in September and October to becoming so disliked by those same locals that the police escort from the mall led to an ovation.

MAGAs are more and more withdrawing into a fantasy world. Let’s understand one thing about the 1/6 protest and riot: We can argue for a hundred years to what extent the election was “stolen.” We can claim (correctly) that Trump didn’t directly “incite” the Capitol storming in a legal (or impeachable) sense. But that crowd wouldn’t have been there, those protesters wouldn’t have been fired up enough to fight cops and smash their way into the building, if not for a central lunatic fiction that somehow Mike Pence could flip a switch and hand the election to Trump. That’s the issue. The entire horrific affair—the greatest gift the left could’ve possibly received—only happened because of a chimera, one that, if not shared by all of the protesters, was certainly shared by those whose actions will forever define the event.

The idea that something, anything, could’ve happened on that day to reverse the election results was a group hallucination vigorously encouraged by Trump, Wood, Powell, Giuliani, and others.

Prior to the Georgia losses, Wood was spinning fantastical yarns about how the runoff didn’t matter because once Pence “flipped the vote” to make Trump the victor, a divided Senate would be fine, as Pence would be the tiebreaker. So don’t bother to vote in the runoff!

He would later tell the true believers that Pence should be executed. He also told them that the entire system—the election, the runoff, the government itself—was rigged by a cabal led by pedophile assassin Tom Hanks who personally approves the murder of QAnons who try to expose the truth. Yes, he tweeted that, and tens of thousands of MAGAs liked and retweeted. On Jan. 6, people in the full throes of this delirium literally charged guns, motivated by the belief that this batshit claim is true. They were willing to die for the delusion (and several did). That should frighten you.

Post-runoff analysis indicates that the two key factors in the GOP losses were the increase in black voters (as the Southwest has hemorrhaged blacks, Georgia’s gained them) and Republicans staying home, possibly by the hundreds of thousands. Just as Wood instructed.

And then on 1/6 a bunch of zealots neck-deep in a lunatic fantasy went nuts when the wizardry they were promised (Pence’s magic switch-flip) failed to materialize. In the wake of that debacle, in a move straight out of any Psychology 101 textbook, unable to admit that 1/6 was an error, the MAGAs have settled on “It wasn’t us—it was BLM!” That’s what all people in the midst of a psychotic episode do. That’s what defines a psychotic episode: the inability to consider the possibility that (a) perhaps the thoughts in your head are dissociative, and (b) perhaps that dissociation has caused you, or is causing you, to act out in ways harmful to yourself or others.

Meanwhile, conservative media personalities, not wanting to lose the MAGA audience (or panicking because they are losing it), are encouraging this denial with round-the-clock “whataboutism” (“Hey, leftists riot too!”), reassurances (“It was BLM!”), and mock outrage over the fact that the opposition is acting like the opposition (“The Democrats are exploiting the 1/6 carnage? I’m shocked. SHOCKED!”).

Well, Kabuki theater ain’t my thing. The left is only doing what it’s expected to do (if rightists begin a reckless action blind to the fact that the left is ready and waiting to exploit it if things go ass-up, that’s on them). I’m more worried about the pathology on the part of those opposing the left. Anyone on the right who did not actively speak out against the outlandish bunkum spewed by the likes of Wood and Powell over the past two months has a hand in the mess we’re now in. I can’t go back to bitching about “Oooh, those darn Democrats!” and “Look at that terrible Biden appointee” and “Oh no, the Senate’s gonna pass amnesty” without acknowledging the core problem of the MAGA delusionals and their media enablers.

One person storming a federal building and attacking cops out of anger that a sitting VP didn’t flip an election because he’s controlled by Tom Hanks and a cabal of satanic pedophiles is laughable. Thousands of them is a problem. And as long as that problem exists and the enablers won’t confront it, there can’t be business as usual, because anyone who’s handed their mind over to QAnon and Lin Wood will be an inevitable liability to any struggle against the Dem domination the cultists helped give us.

That’s the point I’m trying to make with my Century City example. MAGA nutcases are hampering efforts to mount effective strategies. Concerned Californians are working very hard on the Gavin Newsom recall, which—if successful—could set a massive national precedent (as things that happen in Cali often do) against corrupt and hypocritical lockdown governors. But now we have MAGAs turning people against the anti-lockdown movement, against the recall, by storming private property and harassing merchants and shoppers, all because Lin Wood told ’em it’s cool.

That shopping-cart-ramming china shop hippo was wearing an anti-Newsom shirt. Tell me…you think that’s good advertising for the recall? You think that makes my neighbors more likely to support the cause, or less?

See, unlike anti-MAGA conservative scolds like Jonah Goldberg who talk about “saving the soul of conservatism” and “saving the soul of the GOP” by rescuing its “ethics” and “higher standards” from Trump, I ain’t interested in saving souls. I’m “scolding” because phantasm-plagued MAGAs are helping the left and hindering the right. Simple as that. If a delusion is helpful, I’m all for it. Your sanity, like your soul, is not my concern.

But these delusions are unhelpful. And damaging.

Time for MAGA to snap out of it. Stop taking all criticism as “gaslighting.”

Sometimes you really are going crazy.

(Next week in Part II, a closer look at the claim that “it wuz BLM, not MAGA!”)