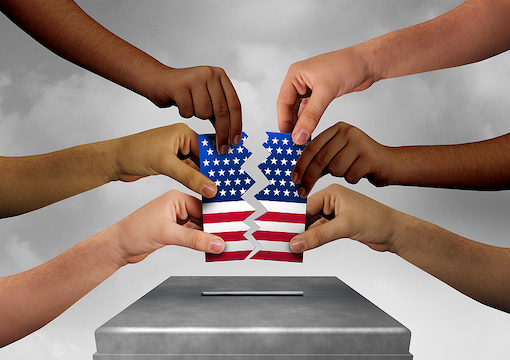 Speaking at a San Francisco fundraiser in 2008, Barack Obama sought to explain the reluctance of working-class Pennsylvanians to rally to his cause.

“You go into these small towns in Pennsylvania and … the jobs have been gone now for 25 years, and nothing’s replaced them.”

“And it’s not surprising, then, they get bitter, they cling to guns or religion or antipathy to people who aren’t like them or anti-immigrant sentiment … as a way to explain their frustrations.”

Eight years later, Hillary Clinton was the Democratic nominee and, at a fundraiser in New York, addressed the same issue:

“You know, to just be grossly generalistic, you could put half of Trump’s supporters into what I call the basket of deplorables. Right? … The racist, sexist, homophobic, xenophobic, Islamaphobic — you name it.”

“Now, some of those folks — they are irredeemable, but thankfully they are not America.”

Last week, President Joe Biden addressed the same issue. But it was not with an off-the-cuff remark that our president revealed his thoughts.

At Independence Hall in Philadelphia, whence came the Declaration of Independence and Constitution, and flanked by two U.S. Marines, Biden described the Middle Americans of 2022. Only now they’re known as “MAGA Republicans,” and no more anti-American assemblage is to be imagined.

In a speech he labored on for days, the president described that half of the Republican Party he sees as wedded to “semi-fascism.”

“The Republican Party today is dominated, driven and intimidated by Donald Trump and the MAGA Republicans. And that is a threat to this country.”

“MAGA Republicans represent an extremism that threatens the very foundations of our Republic.”

“MAGA forces … promote authoritarian leaders, and they fan the flames of political violence that are a threat to our personal rights, to the pursuit of justice, to the rule of law, to the very soul of this country.”

Biden is here hypocritically denouncing as “backward” moral stands championed by his own Catholic faith — opposition to abortion and same-sex marriage — that he himself held not so long ago.

“MAGA Republicans do not respect the Constitution. They do not believe in the rule of law. They do not recognize the will of the people. They refuse to accept the results of a free election.”

“MAGA Republicans … embrace anger. They thrive on chaos. They live, not in the light of truth but in the shadow of lies.”

“MAGA Republicans look at America and see carnage and darkness and despair. They spread fear and lies. Lies told for profit and power.”

On Labor Day, Biden returned to the theme:

This is the place at which Biden has arrived, 19 months into a presidency that began with his commitment to bring America together:

“Today, on this January day, my whole soul is in this: Bringing America together. Uniting our people. And uniting our nation. I ask every American to join me in this cause.”

After 19 months in office, Biden has given up on that cause, for a new cause. The name of the game now is an old one: divide et impera, divide and conquer. Biden hopes to split “mainstream Republicans” off from “MAGA Republicans” and demonize the latter as intolerable allies or partners in our democracy.

Indeed, the catalogue of sins and crimes Biden attributes to MAGA Republicans — extremism, violence, mendacity, authoritarianism — not only raises a question as to the state of the soul of the nation; it raises a question of its continuance as a democratic republic.

At his first rally following the Biden diatribe, Trump called the president “an enemy of the state” and Biden’s speech, “the most vicious, hateful and divisive … ever delivered by an American president.”

In an earlier time, this exchange between the two presidents might have been settled with pistols at dawn.

A house divided against itself cannot stand, said Abraham Lincoln, invoking a biblical truth. While the attributes and conduct Biden attributes to MAGA Republicans may not be such as to make a civil war inevitable, they surely do raise the question of whether our republic ought to endure or to be dissolved.

Indeed, Biden should be asked what differentiates MAGA Republicans who back Trump, given the crimes Biden listed, from the Black Shirts who accompanied Benito Mussolini on the March on Rome?

Does Biden believe MAGA Republicans are as sincere in their beliefs and the methods they espouse to advance those beliefs, as Biden himself, Nancy Pelosi and Kamala Harris are in theirs?

And if so, what do we have left in common?