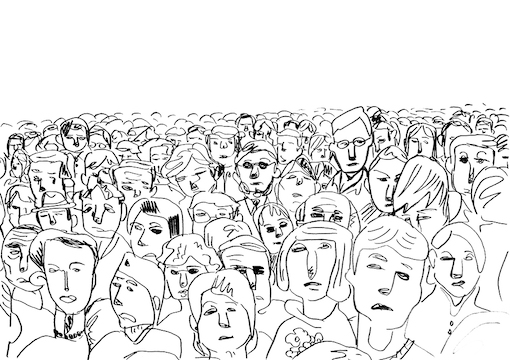 I always knew that lifelong communist and serial race-denier Noel Ignatiev, who campaigned for decades that society needed to “abolish the white race,” was full of it. Allow me to take a sadistic level of pleasure in the fact that a bowel obstruction is literally what killed him last week.

The only published book written entirely by Ignatiev was 1995’s How the Irish Became White, which argued that the Irish were not accepted into mainstream American society until they started supporting slavery and physically attacking blacks. Until then, he said, they were considered a separate species from the Protestant Anglos who formed the nation’s founding stock.

On one level, this is true—even identical twins will find a way to split hairs and fight.

But this is also a common tactic of those who wish to argue that there is no such thing as “white people”—unless, of course, they’re seeking to extort said white people for the imagined sins of their forefathers, in which case they are easily identifiable. Many will say there’s nothing inherently wrong with Irish pride or Polish pride and that it only becomes toxic when you lump them all together as “white.”

Notice that they never apply the same standard to nonwhites. You never hear them say that there’s nothing wrong with Kenyan pride or Zimbabwean pride but that it becomes toxic the moment you refer to them as “black”; they never insist that Jewish people either choose to be Ashkenazim or Sephardim or Mizrahim but that danger lurks once they embrace the umbrella term of “Jewish”—no, to them evil only manifests once people who share a common European ancestry decide to group together in pursuit of common interests.

Saying someone is Polish but not white is as nonsensical as saying an Alaskan king crab is not a crab. But Ignatiev made a career and was lionized upon his death by mainstream publications for peddling inherently contradictory nonsense along the lines of “rape has nothing to do with sex” and “racism exists everywhere, but race doesn’t even exist.”

“Saying someone is Polish but not white is as nonsensical as saying an Alaskan king crab is not a crab.”

Ignatiev was born Noel Saul Ignatin in 1940 to Russian Jewish parents in Philadelphia. Though he was an ardent opponent of Zionism because he said it was based on “discredited” notions of race, it’s worth noting that he never wrote a book called How the Jews Became White. There’s ample evidence that Jewish immigrants did exactly what the Irish did in order to gain acceptance in mainstream WASP society. In fact, Jews might have gone further than the Irish did in their attempts to “pass” as white and enjoy all the benefits of an allegedly white-supremacist society—even changing their surnames to avoid detection. It seems like the smart thing to do when you’re outnumbered by a hostile majority.

A lifelong communist who didn’t realize that unchecked automation and unhindered immigration rendered all Marxist critiques antiquated and somewhat quaintly retarded, Ignatiev decided over 50 years ago that the primary obstacle to a communist revolution was the very idea of “whiteness.” He composed a letter to the Progressive Labor Party in 1967 stating as much:

The greatest ideological barrier to the achievement of proletarian class consciousness, solidarity and political action is now, and has been historically, white chauvinism. White chauvinism is the ideological bulwark of the practice of white supremacy, the general oppression of blacks by whites.

By this time, Ignatiev had dropped out of the University of Pennsylvania to embark upon a decades-long stint as a menial laborer who attempted to organize workers of different races to realize that their bosses were the real enemy. It wasn’t until the mid-1980s when automation rendered Ignatiev obsolete as a worker that he dedicated himself full-time as a “New Abolitionist” who sought to abolish “whiteness.” Without so much as a bachelor’s degree, he somehow wormed his way into Harvard’s graduate problem and eventually snagged himself a Ph.D. and a teaching position.

In the early 90s he founded Race Traitor magazine, whose editors issued the following mission statement:

The key to solving the social problems of our age is to abolish the white race, which means no more and no less than abolishing the privileges of white skin. Until that task is accomplished, even partial reform will prove elusive, because white influence permeates every issue, domestic and foreign, in U.S. society….Race Traitor aims to serve as an intellectual center for those seeking to abolish the white race….When possible, it will support practical measures, guided by the principle Treason to Whiteness Is Loyalty to Humanity…

He went on to argue that when he said “Abolish the White Race,” he didn’t literally mean that white people should be killed, only that they forever be divested of the ability to seek common cause:

The goal of abolishing the white race is on its face so desirable that some may find it hard to believe that it could incur any opposition other than from committed white supremacists. Of course we expected bewilderment from people who still think of race as biology. We frequently get letters accusing us of being “racists,” just like the KKK, and have even been called a “hate group.”…Our standard response is to draw an analogy with anti-royalism: to oppose monarchy does not mean killing the king; it means getting rid of crowns, thrones, royal titles, etc….

OK, then, for the sake of consistency, can we get rid of the idea that slavery excuses all modern black behavior and that the Holocaust excuses all modern Jewish behavior? Or is it simply the con game I’ve suspected it is all along—you want to completely rape one group of its identity while letting all other groups hide behind theirs?

Although I suspect that Noel Ignatiev’s beady little rodent eyes were able to distinguish between white people and black people immediately upon seeing them, his entire premise clings desperately to the notion that there is zero biological foundation for the idea of race. To him, the idea that white people are real is no different than the idea that angels are real—it exists only as an idea and can’t be quantified. But whereas the fictional idea of angels may give some people the illusion of comfort, the idea of whiteness to Ignatiev is a pure cancer that needs to be excised from the body politic, followed by a thousand-year Reich of chemo:

Race is not a biological but a social category. The white race consists of those who partake of the privileges of white skin….There is youth culture and drug culture and queer culture; but there is no such thing as white culture….Without the privileges attached to it, the white race would not exist, and white skin would have no more social significance than big feet.

Where it all enters the realm of Warp Speed Weirdness is that Ignatiev picked the most self-contradictory “example” possible to disprove a biological basis for the idea of race:

Ignatiev stated that attempts to give race a biological foundation have only led to absurdities as in the common example that a white woman could give birth to a black child, but a black woman could never give birth to a white child. Ignatiev asserted that the only logical explanation for this notion is that people are members of different racial categories because society assigns people to these categories.

Granting in advance that I may be misreading the above passage something fierce, it sure as hell seems that the whole “white woman/black baby” thing actually proves that race is biological. Why, it was only a couple months ago when I was stuck at a red light in Stone Mountain, GA and a young black bowtie-wearing Nation of Islam member who was selling copies of The Final Call to motorists taunted me that he could have sex with a white woman and create a black baby, but I couldn’t have sex with a black woman and create a white baby.

“Why would I want to do that in the first place?” I asked him, laughing and then peeling away as the light turned green.

While conceding that I am not anywhere near an expert in genetics, I am vaguely aware of the notion that white genes are said to be recessive. And if what the young Soldier of Farrakhan as well as Noel Ignatiev alleged is true—that when whites and blacks breed, something far more substantial and measurable than two “ideas” is breeding as well—that implies there’s a genetic basis for race and that Noel Ignatiev built his entire career on a false premise.

Yes, I understand that race exists in the realm of ideas. Nearly everything that exists in the phenomenological realm also has its cohort in the world of ideas. For example, just because you can draw a pumpkin pie doesn’t mean real pumpkin pies don’t exist. But race is also a biological reality; how else to explain the fact that my continental ancestry can be pinpointed with a mere saliva sample?

I’d also bet that a DNA test couldn’t measure someone’s level of youth culture, drug culture, or queer culture, but it would be highly accurate in determining whether you’d classify someone as “white” immediately upon seeing them. As is so common with leftists, Ignatiev has reality and “social constructs” entirely back-assward.

Thankfully, I’m able to ask such questions because I haven’t been abolished yet.