How Bill Kristol Purged the Arabists 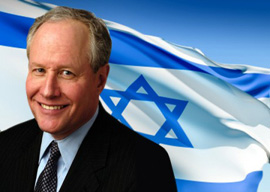 After taping John Stossel’s show on May 16 in New York, the Mrs. and I took the 10 a.m. Acela back to Washington. Once we had boarded the train, who should come waddling up the aisle but Bill Kristol.

The Weekly Standard editor seemed cheerful, and we chatted about the surge in Mitt Romney’s popularity and prospects.

I did not ask what he had been doing in New York, but thanks to the website Mondoweiss, I found out. Kristol was there for a May 15 “debate” with Jeremy Ben-Ami of J Street, the pro-Israel organization, at B’nai Jeshurun synagogue on the Upper West Side.

After listening to Kristol, writes Phil Weiss, “I am still reeling.”

“Kristol was treated like royalty and came off as … a Republican Party warlord,” bragging “about how all the hostile elements to Israel inside the Republican Party were purged over the last 30 years—(and) no one (now) dared to question the power of the Israeli lobby.”

“The big story in the Republican Party over the last 30 years, and I’m very happy about this,” said Kristol, is the “eclipsing” of the George H.W. Bush-James Baker-Brent Scowcroft realists, “an Arabist old-fashioned Republican Party … very concerned about relations with Arab states that were not friendly with Israel … .”

“Refuse to toe the neo-con line on Israel, and you have no future in the Republican Party.”

That Bush crowd is yesterday, said Kristol. And not only had the “Arabists” like President Bush been shoved aside by the neocons, the “Pat Buchanan/Ron Paul type” of Republican has been purged.

“At B’nai Jeshurun,” writes Weiss, “Kristol admitted to playing a role in expelling members of the Republican Party he does not agree with.” These are Republicans you had to “repudiate,” said Kristol, people “of whom I disapprove so much that I won’t appear with them.”

“I’ve encouraged that they be expelled or not welcomed into the Republican Party. I’d be happy if Ron Paul left. I was very happy when Pat Buchanan was allowed—really encouraged … by George Bush … to go off and run as a third-party candidate.”

Kristol’s point: Refuse to toe the neo-con line on Israel, and you have no future in the Republican Party.

But Ben Ami appeared nervous about how this unanimity in the Congress behind Israel had been achieved:

“I very seriously and absolutely do believe that a significant percentage of American members of the House of Representatives and the Senate are intimidated on this issue (of Israel). … They worry about the ramifications of speaking out. … They are worried about the attacks that they will receive.”

Ben Ami said the 50 members who have criticized Israel are courageous, but, “Another 200 are scared to do it.” Haaretz.com reports Ben Ami as saying congressmen “live in fear” of the Israeli lobby.