How I Learned to Stop Worrying and Love the Don 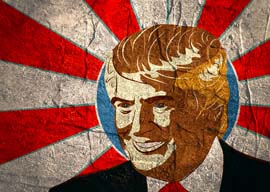 In early 2013, former Saturday Night Live cast member Victoria Jackson, the ditzy blonde who took up space on the show in the late 1980s before fading into obscurity, posted an essay on her website titled “Why Isn”t There a White History Month?” I”m quite certain that as she was feverishly typing away, her mind must have raced with thoughts of how she”d be lauded for being a fearless, balls-out Hollywood Republican who’s totally willing to “tell it like it is”:

Just for the record, white men invented rockets, space travel, airplanes, the automobile, the English language, the U.S.A., most medical advances, electricity, television, telescope, microscope, Ivy League Universities, the computer, the Internet, and on and on. I think white men should be praised and respected. White Christian Conservative Men especially, should be loved and adored. They were the backbone and originators of the greatest nation on earth. We need more of them now.

At the time, I was at the top of my game as an organizer and activist with the Hollywood conservative group Friends of Abe (of which Jackson was a member) and my own organization, the Republican Party Animals. Most important, I was the admin of the secret Facebook group that united the members of both organizations. In that role, I unwittingly became part of a select group of Republicans I like to call the “GOP propriety police.” These folks see themselves as the enforcers of an ideological code of conduct among conservatives, and the guardians of the Republican brand.

“Even if Trump doesn”t win the nomination, the horses have already bolted the barn.”

The Victoria Jackson essay, which I was asked to remove from the FB group after a rank-and-file member posted it, represented exactly the type of thing the propriety police feel compelled to squelch. There’s an unspoken understanding among Republican insiders that there exists a segment of the GOP base that, if given the chance, would be willing to cross certain lines regarding race. So the “brand guardians” are obsessed with controlling and regulating any and all mentions of race. From their point of view, if Republicans and conservatives in general don”t observe respectable boundaries regarding anything relating to race and ethnicity, “we” (Republicans) will come to resemble the racists and bigots that “they” (the left) claim we are. Essentially, the propriety cops allow the left to control the conversation. Leftists say we”re a bunch of racists, so we have to bend over backwards to prove we”re not.

This approach is, of course, inherently flawed. Leftists will always call conservatives racist; it’s part of their standard operational playbook. But the members of the propriety police believe that if conservatives watch their words and stop appealing to “angry white males,” the left will back off and play fair. This is a ridiculous worldview, and the party has suffered as a result. Just Google “Republicans,” “affirmative action,” and “cautious,” and you”ll see how many times over the past twenty years GOP propriety enforcers have demanded that the party “go easy” on attacking racial quotas in hiring and education. Affirmative action used to be a winning issue for the GOP (witness Helms versus Gantt in 1990), and it still could be. According to a 2013 Gallup poll, 67% of U.S. adults in total, and 75% of white adults, reject using race as a factor in college admissions even if it means fewer minorities are admitted.

The Supreme Court’s decision in Fisher v. University of Texas was expected by many legal scholars to be the final nail in the coffin of affirmative action in college admissions nationwide. It’s unknown at present how Justice Scalia’s death has affected the case’s outcome. However, if the presidential election does indeed become a referendum on Scalia’s replacement, this would be the year for Republicans to put affirmative action squarely on the table and hammer it hard. But no, we have been ordered to be “cautious,” even as the left is allowed unlimited zeal in pushing racial quotas and preferential treatment.

To the propriety police, winning elections is not as important as muting and discouraging the GOPs who would have cheered Victoria Jackson’s essay had she not been forced to delete it within 24 hours after posting.

Sadly for the brand enforcers, this election cycle has seen the unleashing of a force of nature many, many times more powerful than a Web post from a bimbo has-been comedienne. Through Donald Trump, the GOPs who might have been receptive to Jackson’s essay are emboldened now. In Trump, they think they have a leader and a voice, and the propriety cops don”t stand a chance. Trump people don”t fold. I don”t mean they don”t fold easily…I mean they don”t fold at all. The GOP enforcers have never been more impotent, and they”re not pleased.

Of course, the belief on the part of pro- and anti-Trumpers that the man is in some way an advocate for white nationalism, fascism, or racial holy war is wrong and foolish. The two sides in the Battle of the Trump have created their own avatars”Trump the hero of the white race vs. Trump the dastardly Hitler Klansman. It’s all delusional. Trump is neither the great white hope nor the great Nazi menace. However, with enough people viewing the Trump presidential run as a referendum on race, it has effectively become one. A proxy war between imaginary Trumps.