How Journaling Can Help You 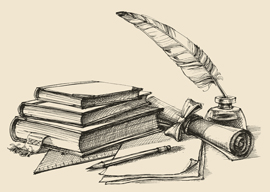 I suspect that I am of the last generation that ever considers writing anything by longhand. Indeed, there are reported to be places in America where children are no longer even taught longhand. Astonishing though it now appears to me, I recall learning to write by using old-fashioned pen with a refractory nib that I dipped in a china inkwell full of watery but nevertheless deeply staining ink, filled regularly by the teacher from a metal jug that contained gallons of the stuff. How proud I was when I finished a page without making a blot (can you, I wonder, still buy blotting paper?). The smell of the ink is with me still; somehow it lingered long after school and got even into my clothes and hair, like cigarette smoke. The ink got into my skin as well, and would come out even by rubbing with pumice stone. I also remember the callus on my middle finger caused by pressure from the wooden handle of the pen. I wanted mine to be the largest in the class to prove that I had written more than anyone else. I was extremely proud of it and examined it regularly to see if it had grown, rather as I now examine the joints of my fingers to see whether the deformities caused by osteoarthritis have worsened. There is something gratifying, or at least absorbing, in watching one’s own body slowly decay.

Be that as it may, the other day I had an idea for a new book that I wanted to write in longhand, and asked my wife whether she had, by any chance, a virgin notebook in which I might start to write it. She did; it was covered in sewn leatherette of an appalling, indeed revolting, color, halfway between sky blue and turquoise, the kind of color that would appeal to a young woman with a hysterical or histrionic personality.

“Kerouac was capable of traveling thousands of miles without taking the slightest interest in anything around him.”

It was of 200 pages, just the length I needed, and was in the form of an undated diary. A page at the front advised those who intended to use it:

HOW JOURNALING CAN HELP YOU

This was the first time I had ever encountered the word journal used as a verb, and I couldn’t help but think of Polonius’ criticism of Hamlet’s letter to Ophelia, which begins “To the celestial and my soul’s idol, the most beautified Ophelia.” Polonius cannot resist an aside: “That’s an ill phrase, a vile phrase. ‘Beautified’ is a vile phrase.” But “beautified Ophelia” is verbal felicity itself compared with “to journal.”

Well, how can journaling help you? It “is a great way to organise your thoughts, reduce mental clutter, and gain insight into who you are.” And when you find who you are—that is to say who you really are—it is bound to be someone rather splendid, not this imperfect specimen who sometimes does not tell the truth, grows irritable when things do not go his or her way, is impatient, loses his or her temper, can’t resist eating too many chocolates if they are there, eats too quickly, talks too much or too little, is spendthrift and ungenerous, is sometimes lazy, enjoys other people’s misfortunes, gossips maliciously, forgets to return telephone calls, and so forth. Journaling can help you to discover your inner perfection.

Organizing your thoughts does not seem to require any particular mental effort, because the potential journaler (if I may coin a noun of my own) is advised to “try stream of consciousness writing, and just write the words or images that come to mind.” Likewise, he or she is told that “writing in a paper journal (as opposed to on a screen)…helps keep your inner critic at bay.” This is because “word processors make it all too easy to constantly edit as you type,” and “writing without that critic can be quite liberating!”

Quite apart from the empirical question of whether it is easier to write in a stream-of-consciousness fashion by longhand than by word processor—and commentary on the internet suggests quite otherwise—there is that of whether the so-called inner critic is a personage who should be kept at bay. Here I am reminded of Truman Capote’s famous (and more than justified) criticism of Jack Kerouac’s book On the Road: that it wasn’t writing, it was typing. The only explanation of the enduring popularity of this worthless book is that it appeals to the mass self-absorption that seems to have overtaken the Western world, for Kerouac was capable of traveling thousands of miles without taking the slightest interest in anything around him.