How Many Female Pandas Does it Take to Screw in a Lightbulb? 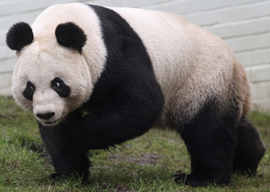 I come bearing great tidings to the women of the world: You no longer have any problems.

Genital mutilation has been wiped out, rape is a thing of the past, and the price of chocolate has dropped to record lows.

That’s the only conclusion I can reach when confronted with the feminist crisis de la semaine:

The inclusion of a panda in the BBC’s annual list of female “Faces of the Year.”

That panda would be “Sweetie,” on loan to the Edinburgh Zoo along with her would-be mate. “Zoo bosses,” we’re told, “are hoping that they will reproduce.”

Whilst we all love a good panda story, in a year when Christine Lagarde became head of the IMF, or Helle Thorning-Schmidt became prime minister of Denmark or even the sad death of Amy Winehouse, its [sic] frustrating the BBC couldn’t think of 12 human female faces who have made the news this year.

If only she’d stopped at “Denmark.”

Last I checked Google, there were over 350 news stories about this “controversy,” although some of these stories purport to analyze how such stories become stories in the first place.

One easy answer is Twitter. Furious females (and an alarming number of males) using the hashtag “#pandagate” targeted journalist Bob Chaundy for punishment, since his byline appeared on the BBC’s “Faces” webpage.

I didn’t choose the BBC women faces of the year subjects, just wrote them. Two black eyes from the wife though. Pandamonium!

He added that the BBC’s annual list is supposed to be lighthearted, but appealing to feminists’ senses of humor is as productive as asking an unknown number of them to screw in a lightbulb. The BBC itself gently reminded the outraged that previous lists included a carp and a pig. Confronted with that inconvenient fact, the complainers hurriedly invented a new problem. The real trouble with the list was that the human women on it were an embarrassment, too. Congresswoman Gabrielle Giffords made it for being shot in the head; hotel maid Nafissatou Diallo, for allegedly being sexually assaulted by Dominique Strauss-Kahn; and Iman al-Obeidi after claiming she’d been gang-raped by Gaddafi’s soldiers in Libya.