How Robots Push Our Buttons 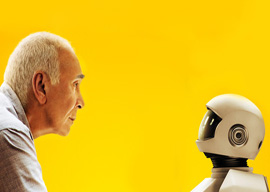 Robot & Frank is a clever little sci-fi dramedy about a semi-senile old coot whose concerned son buys him a robot as a valet and minder. The film is well crafted and timely because robophobia is once again in fashion. Americans, faced with a rapidly growing population, fear robots will arrive soon and take what jobs are left.

In contrast, the Japanese, faced with a shrinking population, fear that robots won”t get here fast enough to spare them from finally having to let in poor foreigners to care for their elderly. While Westerners traditionally fear that robots are plotting to take over (e.g., Terminator), the Japanese welcome our new robot overlords.

Quite conveniently for those of us whose memories aren”t what they used to be, Frank is played by Broadway star Frank Langella.

Allow me to pause to commend this title to filmmakers. This slightly twee art-house flick could have been given a twee art-house name like Automata or Quiddity. Instead, they chose to dub their Frank Langella-starring robot movie Robot & Frank.

Please, filmmakers, try naming your characters after the movie stars who play them. I”ve read at least 20,000 movie reviews, and I”ve been able to comprehend the plot summaries of maybe a half-dozen. That’s because I always forget how to match the characters” made-up names with the famous faces portraying them.

“Can we actually care about things that can only pretend to care back?”

In fact, putting “Tom” in the title would probably help us when we get to the ticket window and can”t remember your film’s name. Your audiences aren”t getting any younger. Bad Guy & Tom would work fine.

Oh, yeah…in Robot & Frank, Frank (who, as I may have mentioned, is played by Frank Langella) objects to his upbeat new companion.

But you can tell that the robot isn”t your standard evil movie robot because his voice, furnished by the opaque but likable Peter Sarsgaard, isn”t quite as gay as such helpful but murderous automated valets as 2001‘s HAL 9000 and Michael Fassbender’s Lawrence of Arabia-worshiping robot (who was the only non-derisible thing in this summer’s Prometheus). Sarsgaard’s robot sounds more like an unusually sedate Mormon camp counselor. (Also, the robot is only four feet tall and appears to have been designed by a Japanese child.)

Frank soon finds, however, that his robot’s photographic memory is useful in resuming his old career of casing joints. Frank is actually an involuntarily retired cat burglar. With the robot as his aide-mÃ©moire, he can burgle the lake house of an annoying consultant, a Future Yuppie. The Fuppie is repurposing Frank’s beloved small-town library as a post-print theme attraction venue…well, it’s never clear exactly what the Fuppie is doing, but Christopher Ford’s dialogue reminds us how baffling the fashionable notions of 2040 will seem to us codgers.

The Japanese tend to be extremely sensitive to other humans” emotional discomfort, which makes social interaction for them exhausting unless expensively lubricated by alcohol and professional hostesses. (That’s one reason that fewer and fewer young Japanese men bother to come out of their rooms.)