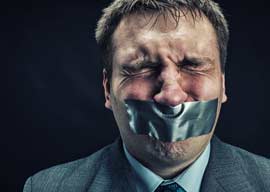 They”ve fostered a savagely intolerant climate where the president of Harvard can get canned merely for suggesting that the sexes may be different. Where someone who uses the evil patriarchal tool of mathematics to deflate overblown hysteria about sexual assault on campus is disinvited from a campus speaking engagement. Where Yale students are prevented from quoting F. Scott Fitzgerald due to the imagined “homophobia” in the word “sissies.” Where displaying “a condescending sex-based attitude towards a person” constitutes sexual harassment. Where merely uttering “sexist statements” is deemed a literal act of sexual harassment. Where you can be prohibited from using computers to transmit “material, which in the sole judgment of the University is offensive, violent, pornographic, annoying or harassing….” Where students are confronted by campus police for”get this”merely handing out copies of the US Constitution.

Colleges have become indoctrination factories where incoming students are instructed that all whites are racists and that nonwhites are incapable of racism. Where freshmen”sorry, freshpersons“at Harvard were asked to sign an oath affirming the highly anti-intellectual notion that “kindness holds a place on par with intellectual attainment.” Where any guest speaker, no matter how reasonable or genteel, can be shouted off a campus by infantile mobs of pampered leftists who only differ from students at Berkeley in the early 1960s in the sense that their actions are now utterly risk-free.

All of this has not merely had a “chilling effect” on free speech. In many cases, it has absolutely frozen the possibility of open debate. A wide-ranging 2010 study revealed that a mere 35.6% of college students “strongly” agreed it is “safe to hold unpopular positions on campus.” Among faculty and staff, it was even worse”a piddling 18.5% agreed with that statement.

If any of the ideological descendants of the original Free Speech Movement gave a fig about free speech, they”d stop the ritual silencing, shaming, and expulsion of anyone who doesn”t kowtow to predatory egalitarianism and incessantly ludicrous leftist pieties.

The repression is hardly confined to campuses, although that’s where it originated and remains most intense. It is also rampant in the media, in the workplace, and online. Things are so repressed that the vast majority of online commenters who don”t toe the dominant ideological line are wary of using their real names for fear of the consequences. This is a climate that is anything but free. It is high time to throw our bodies full-force on this new, smiley-faced machine that seeks to crush us.