How the Internet Made Us Authors and Most Authors Awful 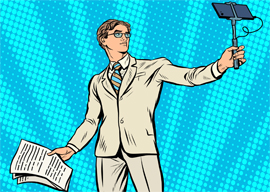 In the spirit of the primped humility that is clitsch, “I”m not going to lie”: A Black Mirror episode inspired this piece.

We”ve heard the sound: the “so cute” refrain, the first syllable pricking like a vaccination shot. Note how all our narrations devolve into the cadence of yada yada yada”as if our lives were a list. Clitsch is artificial in its attempt at authenticity. It follows the ritual man-grooming in a public restroom: the restriction of mirror-gazing to his handwashing time, the certain angling of the nose, the casual sheveling as he waits for the dryer. More than the way Sontag said of camp, clitsch exists in quotations; it is the “gritty and spontaneous” that refines and mechanizes.

Of course, the tendency is as old as Xanthippe’s, in whom Socrates identified the vanity of our age: “What you are going for is not to see, but to be seen.” But the term can serve as more than just a catchall for self-serving humility. For what Gutenberg did for literacy, Zuckerberg has done for authorship. We”ve become a public of first-time listeners and longtime callers. An un-liked photo is no different from an orphaned article; the anguished handler of an unverified Twitter handle finds his fellow pilgrim in the half-published freelancer. Clitsch is the grammar by which we edit despair, conjugate relevancy and decline into parts of being. But it is also a writer’s consultation with the Urban Dictionary (and this author’s chosen spelling of clitsch to differentiate from one particular entry therein); it is a politician’s adoption of y”all and forswearing of terminal g‘s. And despite what our creative-writing teachers would workshop out of us, it is the confessional poetry of a negotiated self.

“We”ve become a public of first-time listeners and longtime callers.”

Like a poker hand, certain rules evince themselves. The common performing the uncommon (and vice versa) trump the self being the self, hence the unrivaled filmed film of a marriage proposal and a Kardashian extending her family (despite the transience that those events bode). So in addition to the trolling and ghosting gracing the web, we can stumble across the political satyrs and sirens: the Republican-looking Beshear or Republican-supporting Milo who brandish their contrasting natures for attention.

In the same spirit of contrast, the humblebrag or treating-myselfie will out-clitsch any blatant show of charity or vanity. The “I Eat, Therefore I Am” photos provide a useful four-course meal illustrating the concept: the I”m-busy-so-I-got-fast-food-that-I-have-enough-to-photograph, the look-at-what-you-can”t-afford, the look-at-what-you-didn”t-make, and finally the locally-sourced-memory-inducer. This piÃ¨ce de rÃ©sistance resembles the same patronizing conscientiousness on display when academics tell minorities how they should feel about their names, their cuisine, or what is no one’s culture at all. Campaigning to raise awareness for the sake of awareness, they only seek to serve up healthy servings of guilt.

When it comes to tenor, we learn how the sarcastic, singular, touchy, and touching all make the viewer relevant and thus the viewee even more so. (One important caveat brought to us by a former New York congressman: Combine the touching with the touchy at your own risk.)

Finally, like-baiters should only hint at themselves; selfies depicting only one’s own body pale to those that frame (sanctioned) appendages with other places, pets, and people. Nevertheless, even these photos depict an entire person, the idea being that the less appendages depicted on one’s actual body, the more other objects and objectified people serve as the limbs of an amalgamated self. And so we have begun to treat the world as our gallery. Students now see their campuses as a kind of feed from which they must filter those that challenge them and post only those that reflect them.