How the Love Boat Ruined My Life 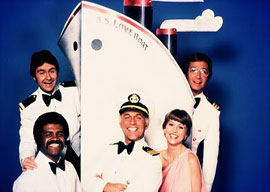 A relic of a long-gone era of “happy endings” and “family viewing,” the real-life Love Boat’s final voyage was marred by a perfectly po-mo, Irony Age tragedy.

No doubt the SyFy Channel (of Sharknado infamy) already has a movie in the works about a once-popular, now-forgotten cruise ship stuck in dry dock, haunted and plotting revenge.

You can practically hear the pitch:

Just as tragic ocean liners of old burned uncontrollably due to accrued coats of varnish and glue, every inch of the “Love Boat” was similarly imbued with ten years’ worth of smarm and schmaltz, a fatal airborne marinade of Robert Goulet’s Brylcreem and Joan Collins’s eau de cologne.

“Normal people think back on that show as clean, wholesome fun”and I suppose it is, compared to Breaking Bad.”

Better yet, The Love Boat was one of the only television shows of its era (1977-86) that still used a laugh track, (AKA “closed-captioning for the humor-impaired”). By now most people have heard the (very po-mo) story behind “canned laughter”: that sound engineers reused the same sampled audience giggles”originally recorded at live tapings of, say, I Love Lucy“for decades. Which means that many of the folks heard “laughing” (impossibly) at the wacky hijinks on The Love Boat were actually dead at the time.

I sometimes wish I didn’t see the world like this, through a Gen-X filter of self-defensive snark. I didn’t always.

I blame, well, The Love Boat.

As the only child of two only children (both divorced multiple times), I was doomed to turn out twisted: timid, taciturn, touchy, and morbidly imaginative. Growing up in the 1970s didn’t help. The Patty Hearst and Chowchilla kidnappings scared me. Hell, Watergate scared me and I didn’t even know what it was. (Something about “bugs.”)

Terrified, too, of collapsing whatever pile of pick-up sticks we were calling “our family” at any given time, I kept my crazy fears to myself.

I watched a lot of TV, of course. That scared me, too. I don’t just mean the fetish-doll finale in Trilogy of Terror or bits of The Night Stalker and all the other cathode-ray frights now lovingly curated at the invaluable website Kindertrauma.

I mean: The Paper Chase scared me. It’s one of the reasons I didn’t go to college. (Thank God, as it turned out.)

The Love Boat scared me, too.

Normal people think back on that show as clean, wholesome fun”and I suppose it is, compared to Breaking Bad.

What I saw was a weekly parade of casual sex and craven deceit. Characters pretended to be something they weren’t”deaf, perhaps, or a millionaire, or even a member of the opposite sex”to make their spouses jealous or seduce some semi-stranger they were in “love” with. Seduction completed, the pair discarded each other at the end of the cruise like condoms and Kleenex, smiling fondly as they waved goodbye. Forever.