How the Tea Party Sunk Itself 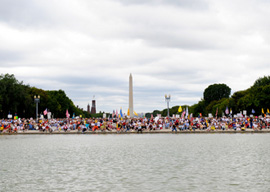 The Tea Party emerged about a year after I first got interested in libertarian politics, and I was proud to see people protesting against taxation and supporting individual freedom. They seemed committed to a vision of how to return our country to its roots. Slowly, though, the issues became less pronounced. The movement became little more than a roasting of all things Obama”ACORN, Van Jones, etc.”with no evident purpose beyond producing nifty Republican campaign tactics.

1. Michele Bachmann. She claimed to have read Ludwig von Mises (and therefore should still understand his theories on easy credit) while maintaining a fierce campaign against Fannie Mae and Freddie Mac, but then it came to light that she had profited from federally subsidized housing loans that these organizations backed. Then it was revealed that she”d worked for the IRS. She excused this job as the best way for a warrior to “know your enemy,” Sun Tzu-style. Her hypocrisy was unbearable.

2. Herman Cain. The Tea Party hated the Federal Reserve, which taxes us indirectly by devaluing the US dollar to less than $0.05 of its 1913 value. Not only did Cain have a stint as chairman at the central bank’s Kansas City branch, he insisted that anyone who supports a Reserve audit doesn”t understand what the Fed does. A few months later we finally understood: It provides banks with under-reported bailouts worth $16 trillion. Since his 9-9-9 plan would have severely increased the cost of living for many people, he would have almost been the Tea Party’s evil enemy if Occupy Wall Street hadn”t filled that role.

“The short-term goal of getting elected cannot outweigh the importance of constitutional consistency.”

3. Rick Perry. Forcing girls in sixth grade to get vaccinated sounds like one of Dr. Mengele’s wet dreams. Perry turned it into a Texas state social policy. He also had extensive financial ties with the pharmaceutical giant producing the vaccines. Weren”t objections to government-corporate partnerships (e.g., TARP) essential to the Tea Party?

4. Rick Santorum. At first the Tea Party rightly rejected this religious nut. Then they began flocking to him like sheep. In February the Pew Research Center showed 42% of Tea Party Republican voters favoring his campaign, even though Santorum found their attempts to refashion the Republican Party 100% unfavorable. In 2005 he told NPR the idea that politicians “should keep our taxes down and keep our regulation low and [not] get involved in the bedroom” wasn”t traditional conservatism.

5. Newt Gingrich. Newt’s liberal laundry list is infinite. When 100 Tea Party leaders from 25 different states planned to announce support for Gingrich in January, they seemed unaware of his voting record. In the 1990s he supported the death penalty to enforce drug prohibition. He was then paid around $600,000 to lobby for ethanol. He also earned about $1.6-$1.8 million when he worked at Freddie Mac. A year ago he stated that “all of us have a responsibility to help pay for healthcare.”