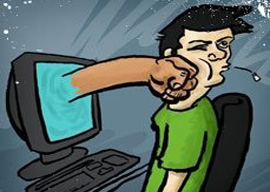 Oh, what a warm womb of anonymity the Internet provides for the frustrated, the voiceless, the inadequate, the terminally unpleasant, the unpublished writers, and the grown men who live in their mothers’ basements on welfare!

Shrouded by the cyber-cloud and cocooned behind a fake screen name, you can be anyone you want to be on the Internet—especially someone stronger, more attractive, and braver than you are in real life.

It wasn’t very long ago here on Taki’s Mag when commenting on articles wasn’t even an option. We made this option available because some of us are Greek by birth and others are Greek in spirit—we value the public exchange of ideas as expressed in the ancient Greek agorai and—even though we’re not nearly as keen on Italians—the ancient Roman fora.

But we also suspect that if, say, someone were to stumble in half-cocked and fully loaded to a public debate in ancient Thessaloniki and started doing nothing but shouting wild, unsubstantiated allegations about the other debaters, they would have either been gently escorted away from the marketplace or perhaps even publicly executed.

Try to envision our comments section as a cocktail party which is open to everyone—unless you start screaming, breaking things, and pooping on the floor. As with cocktail parties, such behavior tends to drive away those who are actually fun and interesting.

Although we are generally despondent about the quality of public discourse in the Anglosphere, we like to believe that most of our readers are intelligent and are therefore able to comport themselves intelligently, no matter how vehemently they disagree with what we’re saying.

The reason for even having a comment section is not for you to praise or insult the writer in question, but to discuss the ideas expressed in their articles. If you disagree with their points, you’re encouraged to explain why. Although it shouldn’t need to be explained, things such as “logic” and “facts” are crucial for making an effective counterargument.

If you have points to make, then for Christ’s sake and the love of Pete, by all means make them. We have never banned a commenter for expressing an “offensive” belief or one with which we disagree.

Commenters typically get banned for committing one or both of the two deadly sins—for being stupid or for serial rudeness. These are the same reasons we’d 86 them from a party.

STUPIDITY
If, over what we deem to be a reasonably lengthy probationary period, you prove yourself incapable of making a point and instead lean solely on logical fallacies as your rhetorical crutches, you will promptly be banished from the premises and given a one-way ticket to Stupidville.

RUDENESS
If you establish a consistent track record of bringing absolutely nothing to the discussion beyond cheap insults and rude treatment of our writers and other commenters, our cyber-bouncers will toss you out the doors and onto the sidewalk. Insults are fine—we love skillfully phrased takedowns, even if directed at us—as long as you wrap them around a logical point. But if insults are all you have, find another cocktail party. You remain absolutely free to act like a child everywhere else on the Internet.