How to Get Rich in America in 30 Easy Steps 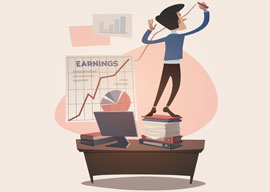 Want to make money in America? Start up a business and sell it. I”ve done it a bunch of times and made a ton of money in the process. Here’s how you can do it, too.

1. READ SIX THINKING HATS
At least the Wikipedia page. Edward de Bono’s best-selling book is a great way to ensure you don”t get stuck in a mental rut. Sure, being critical of a project and saying why it can”t be done (“Black Hat” thinking) is useful, but it’s also the easiest hat to wear and can be a real bummer when it’s overdone.

2. SOCIALIZE
Solving problems is all about knowing a guy who knows a guy. You establish a network by staying connected, and that means staying curious. We could have paid an animal service $500 to provide a dog for this Converse spot, but I knew my friend Judi’s dog Boner would be perfect, and Judi was happy to get $100 to see Boner on TV. If you smoke pot and watch TV with your girlfriend all weekend, you”re not “recharging your batteries.” You”re falling behind.

3. MAKE PROFITS A PRIORITY
Make your To Do list away from your desk and do it at night when you have perspective. After it’s done, put the ones that make money at the top of the list. Sure, your friend needs help with his Web page and he’s promised you equity down the line if it ever goes anywhere, but the guy who wants you to go over his book proposal is offering cash now.

4. IDEAS AIN”T SHIT
Most kids today think there are fun jobs like working on the show Eagleheart. Then there are shitty jobs like highway construction. They”re both the same job. Sure, it’s fun to come up with funny ideas for the show, but that only takes a minute. The other 99% of the show is lugging the equipment to each spot, setting up the lighting, getting the boom right, transcoding the footage, getting the notes on the first cut, and so on forever. This is why it’s so important to have summer jobs as a kid. You learn how to bust your ass.

5. ASSEMBLE A HIPSTER, A HACKER, AND A HUSTLER
If you follow the money and keep doing the thing that’s generating a profit, eventually a company will form. Ad agency exec Rei Inamoto said, “To run an efficient team, you only need three people: a Hipster, a Hacker, and a Hustler.” That is, you need a pop-culture nerd that’s obsessed with creating content, a tech geek that can make sure your project works on all platforms with no glitches, and a salesman who is out schmoozing clients and bringing in money. Everyone is replaceable at any company, but my experience has been that the Hustler is the least replaceable.

“My experience has been that there will be about one win for every 15 failures. You need thick skin to not let all that rejection chip away at your ego.”

6. LET THE JEWS RUN YOUR MONEY
Years ago I asked Def Jam cofounder Russell Simmons about the secret to his success. He told me he did well because he didn”t get caught up with “his peeps” and only hired people based on who was good at their job. We talked for a while and I started to get the feeling he was really saying, “I didn”t just start hiring blacks because I”m black. I hired Jews because they”re good with money.” It seems like every time I see a financial mess”from American Indian tribal issues to charity issues with the Catholic Church”it’s linked to a lack of Jews. The Nazis might still be around today if they had let some Jews in their wallets.

7. CREATE A “CRAYON CONTRACT”
Don”t waste money on lawyers if you don”t yet have a company. Draw up your own contract among the partners that clearly explains who gets what equity and why. Within this contract, there should be a “What if I fuck your wife?” clause that lays out exactly what will happen if you end up hating each other’s guts. These contracts should always be signed in blood. (I find biting your inner lip is the most painless way.) There were a lot of arguments when I started my most recent company and when things got bad, I pictured the blood-soaked contract I had sitting in my safe and it gave me peace.

8. WORD IS BOND
A man is only as good as his word, so don”t flake or say things you don”t mean. “I give you my word” should have gravitas and that is something you need to earn. When someone commits to something with a handshake and later bails out, I mentally put him into a compartment labeled “Bullshitter,” where he remains forever.

9. BONE UP
Know your industry. Read Fast Company if you”re doing anything remotely media-related and read Handyman if you do everything else. That way, when someone brings up that new thing people are doing during a meeting, you”ve heard about it. Shark Tank is another helpful show for new entrepreneurs.

10. ASSIGN A PRESIDENT TO EVERY PROJECT
It’s very groovy to treat everything like a hippie commune, but the buck has to stop somewhere. There has to be a boss for every project and it’s his job to make sure everyone is hitting their deadlines and the client feels like his voice is being heard from soup to nuts. The president gets the high fives when the job is done, but it’s also his head on the chopping block if something goes wrong.

11. STAY NEGATIVE
Basking in success leaves you vulnerable to failure. Before going out and getting wasted to celebrate a finished project, have a meeting with everyone involved and discuss what went wrong. Who screwed up, what was late, and how can we make sure that never happens again? That’s the worst part of being an entrepreneur. You”re constantly worrying about worst-case scenarios so when they happen, you”ve already mapped out a plan to solve them.

12. DON”T TAKE NO FOR AN ANSWER
When I ran a tree-planting company, our competition had a motto: “Do your best and fuck the rest.” They promptly went bankrupt and lost their contract, which meant the house their owner used as collateral now belonged to the government. You don”t hope things will work out. You make them work. If that means staying up all night and doing it yourself, then stay up all night and do it yourself.

13. START WITH WHAT THEY NEED
If someone is looking for a thirty-second clip from a celebrity, you only need to interview said star for about ten minutes. I don”t know how many times I”ve seen writers transcribe an hour-long interview and then spend days trying to whittle 20,000 words down to 500. If they only need 500 words you can bang it out on the phone without even taking notes. I call this the “red book syndrome.” In English, we use the adjective “red” first and then the noun “book,” so your brain first has to take this infinite blob of red and then cram it into a tiny book. In French, they say le livre rouge, so you start with the book and then only need to fill in enough red to cover the front. Stop wasting your time with a big blob of red. Start with the book first. Start only with what you need.

14. SUCK IT UP
If you turn off your phone on Friday at 5 and consider yourself off the clock, you”re not an entrepreneur. Owning a business is like being a fireman, and if a client is in town and feels like grabbing a beer, put your shoes back on, kiss your wife goodnight, and get out there.

15. SAY YES TO EVERYTHING
When someone discusses a partnership or a huge project that could take years, your first instinct is often to sit around and poke holes in the plan. That’s not healthy. Instead, say yes to everything and talk about all the positive things this could lead to. Let the Jews hammer out the details when you get the contract. If it makes dollars, it makes sense.