How to Hire Better Cops 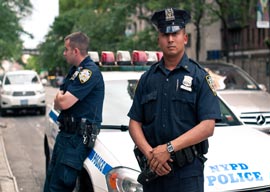 With the Democratic presidential candidates Bernie Sanders and Martin O”Malley being shouted down at a progressive convention for not abasing themselves fully enough to a Black Lives Matter rent-a-mob, it’s worth taking a look at what some cities could quite feasibly do to hire better policemen.

While it’s amusing to watch the Democrats” Coalition of the Fringes come unraveled over a pseudo-epidemic of police violence against black bodies, we shouldn”t ignore the basic blocking and tackling necessary to have good government. We could all use better policing. And to get that, we need to understand how political correctness about race has made many cities too stupid to hire their best applicants, even just among their white job-seekers.

One of the most blatant lessons of the past generation is that selection often matters more than treatment. Harvard, for instance, isn”t Harvard because it takes in random high school students and smartens them up into Goldman Sachs rocket scientists. No, Harvard remains Harvard because it has invested heavily since before WWII in researching how to find the applicants likely to make the most money (and give some of it to Harvard).

Like Harvard, police departments get far more applicants than they have openings. (The ratio in the 1990s was 10 to 1.) So they could hire well, if they cared to.

There are two common viewpoints on how to choose policemen. Either hire:

The best individuals who apply, or

I think both arguments have some surface plausibility because the police are, as the word suggests, inherently political.

It’s not unreasonable to imagine that since such a disproportionate fraction of homicide perps, victims, and witnesses are black, police forces should strive to have a number of blacks. By way of analogy, although female firefighters have proved fairly useless (it’s not coincidental that none of the 343 firefighters killed on 9/11 were women), women cops ought to be valuable for, say, getting evidence from rape victims.

Similarly, a lot of police work in modern America is persuading black witnesses to show up to testify against black criminals.

“The superior solution would be to hire cops in rank order within their race’s quota. That way, police departments would get the best blacks and best whites rather than the random flotsam chosen by lottery.”

Strangely, though, nobody has ever produced much evidence that diversity hiring improves policing. In the largest such natural experiment, Congress ordered Mayor Marion Barry’s Washington D.C. to hire 1,800 additional police officers in 1989″90. By all accounts, this proved a disaster. As of 1994, over 100 of D.C.’s new cops had themselves been arrested.

Similarly, advocates of diversity hiring seemed compelled to lie about the evidence. For example, the federal consent decree against the LAPD in the Rampart scandal was sold to the public as being due to revelations of white racism among cops. Yet the main malefactors were all diversity hires, some of them moonlighting for felonious hip-hop producer Suge Knight. Strikingly, the Oscar-winning movies Training Day and Crash were more realistic about the race of the Rampart bad guys than was the news coverage.

L.A. Times reporter Jill Leovy’s impressive 2015 book Ghettoside recounts how a tall blond LAPD detective named John Skaggs gets South Central witnesses to risk their lives to speak out in court against local murderers (although I suspect Leovy may have crafted her account of Skaggs” charisma to catch the eye of Brad Pitt’s agent).

It’s seldom recognized that the argument for racial quotas makes more sense for cops than for firemen. A couple of weeks ago my column “The Density Divide“ brought up a fundamental divide between two kinds of human activity: objective striving against the natural world versus subjective contention for social dominance. Firemen battle chemical reactions, so it makes sense to hire them meritocratically, while policemen try to impose their will upon other people, so political considerations matter relatively more.

One thing to keep in mind, however, is that for sad suburbs like Ferguson, Mo.“the locus of so much media frenzy in 2014″neither alternative is much of an option. Ferguson is too poor and too scary to attract many qualified black cops, who enjoy more attractive options. Last year, St. Louis-area blogger Countenance explained:

Why are there only three blacks on Ferguson’s 53-officer P.D.?… If you”re a black in the St. Louis area…and want to be a cop, would you want to be on the relatively low pay/high danger Ferguson P.D.? Especially when affirmative action means that every law enforcement agency will be lusting after you? You have many better options when it comes to departments and agencies that pay better and/or have a lot more peaceful community to patrol. St. Louis City has roughly as much danger but with higher pay…and lots of municipal P.D.s in various incorporated areas of St. Louis County may pay as poorly as Ferguson but are a lot less hazardous, i.e. black. The most plum agencies are the old to new money suburbs of substantial population near Highway 40: Clayton, Ladue, Town and Country, Chesterfield. High pay and low danger.

Big cities, however, typically have more money to attract applicants. For example, the starting salary at the unpopular but glamorous LAPD is $57,420. NYPD officers make a base salary of over $90,000 after five years, and overtime can be lucrative (not to mention police departments offering the kind of pensions that have bankrupted a number of towns).

However, even high-paying police departments don”t have all that many competent black applicants, since blacks with three-digit (or even high-two-digit) IQs and clean criminal records are in so much demand in 21st-century America.

Police employment practices in American big cities were once mostly just current cops hiring their relatives fresh off the boat from Ireland. Over time, though, civil service reform led to more honest systems.

For example, in 1939 the NYPD tried hiring by intelligence, choosing the 350 top scorers on one of the newfangled IQ tests. You might think that IQ tests would be only good for measuring book smarts, but it turns out that most forms of intelligence are correlated: A 1979 follow-up found that the NYPD had managed to hire a class of street-smart Lennie Briscoes.

Most police departments today start the hiring process with some form of written test. Just as with college admissions tests like the SAT and ACT, a paper and pencil test is more economical to administer en masse than oral, physical, or background checks, which are usually reserved for later when fewer applicants are left.

The tests are typically focused upon police-related questions, but they can be aced either by the generally intelligent or by those who care enough to study up on police methods. (Here’s the Baltimore Police Department’s study guide.) The Christian Science Monitor put together a representative sample of 20 typical questions. I got 90 percent right, missing a couple of queries about things like when should cops turn on their sirens because I seldom watch police procedurals on TV anymore.