Huckleberry Finn and the Whitewashing of American History 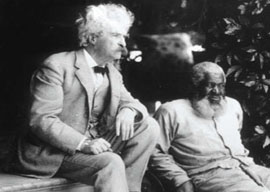 Mark Twain and his friend John Lewis in 1903

By its editor’s count, 219 “niggers” have been expunged from a reprint of Mark Twain’s Adventures of Huckleberry Finn that’s being foisted on our humiliatingly sensitive world next month by Alabama-based NewSouth Books”218 from the book itself and one “nigger” from the table of contents. Since it’s being released in one volume with The Adventures of Tom Sawyer“which contains an additional quartet of “niggers””that’s 223 “niggers” who no longer have a literary home.

In both books, Auburn University English professor Alan Gribben has replaced “nigger” with “slave.” He has substituted all references of “Injun” with “Indian,” as if that will make either the Cherokee or the Hindus any happier. And the term “half-breed” has been swapped out for “half-blood,” which, frankly, sounds even harsher to me.

I”m not sure exactly what makes Alan Gribben an “editor” in this case, because it took me all of 45 seconds to copy the original book’s entire text, paste it into Word, and then search and replace “slave” for “nigger,” “Indian” for “Injun,” and “half-blood” for “half-breed.” (There were only 212 “niggers” in that online version. Professor Gribben is either working from a different manuscript or is hallucinating seven “niggers” that don”t exist.)

Imagine being in the conference room where this book project was pitched and then greenlit. “OK, I”m thinking outside the box with this one, people”schools aren’t stocking Tom Sawyer and Huckleberry Finn anymore because of the N-word, so we’ll come out with a N-word-free version, move some units, and keep these important books’ wonderful legacy alive”although culturally circumcised so that dirty old discarded foreskin of a word doesn”t hurt any fat black teenaged girl’s feelings and we all wind up getting sued. Howzat sound”brilliant or what?”

At the very least, this is ingenious marketing. Both Tom Sawyer and Huckleberry Finn are already available for free online, and you can find them for free in any public library or at any thrift store for a quarter. Gribben and NewSouth Books have the coconut-sized balls to charge TWENTY-FIVE DOLLARS for their niggerless reprint.

In justifying his revisions, Gribben recalled how at his daughter’s school, an “African American girl””he made clear it was his daughter’s “best friend””had been traumatized by being forced to look at the word “nigger” when assigned to read Huckleberry Finn. Gribben claims that his mother raised him as an anti-racist and told him you could tell “the wrong kind of people” by the fact that they said “nigger” aloud. He says that Huckleberry Finn‘s over-reliance on the word has caused teachers to shun the book, forcing it to fade from popular culture”a process he refers to as “preemptive censorship.” So he is fighting such preemptive censorship by preemptively censoring the word “nigger” from Twain’s manuscript.

This is not the first time that well-meaning imbeciles have fucked with Huck. In 1955, CBS televised an entirely defanged version of Twain’s novel in which slavery was not mentioned and a white actor played the nigger”oops, I mean the slave“character Jim. In 1957, NYC’s Board of Education yanked the book from its list of approved texts because of those 200-plus pesky “niggers.” The novel is repeatedly near the top of national banned-books lists because parents, students, and teachers can”t stand seeing so many “niggers” grouped together in one place.

This isn’t even the first time the book has been de-niggerized. A couple decades ago, a teacher at Mark Twain Intermediate School in northern Virginia”a man named John H. Wallace who called Huckleberry Finn “the most grotesque example of racist trash ever written””also reprinted the book with “slave” in place of “nigger.” I”m not sure how he treated the Injuns and half-breeds.

We live in a paralyzed state of cultural psychosis about the word “nigger.” Researching this piece, I kept slamming into the old tiresome memes about how it’s a “hurtful” and “poisonous” word, “inarguably the most inflammatory word in the English language,” “that word which shall not be spoken by white people in the United States,” and how anyone who still uses it “should get a rap in the mouth.” One woman wrote of how her “stomach churns” merely by having to type it.

Is “nigger” really so much worse than “slave”? It’s arguably far better. If it’s a choice between being called a ca-ca-doo-doo name that disparages my ethnic tribe”most of whom I choose not to hang out with, anyway”and literally being chained, whipped, and forced to pick cotton under the Georgia sun, I think I”d choose “nigger.” The famously pro-black but ironically not-black-at-all Roger Ebert found himself in a fat heap of trouble the other day for Tweeting, “I”d rather be a nigger than a slave” in response to this controversy, but something tells me ol” Roger’s pretty weird about black people in general and has probably fantasized about being both a nigger and a slave.

“If there’s a huge and sordid part of early American history that’s been whitewashed, it sure as fuck isn”t black slavery. “

In online discussions and editorials on this matter, Americans generally fall into two camps:

1) Those who support censoring “nigger” because it’s important to protect the still-fragile feelings of African American children who might be startled to learn, undoubtedly for the first time in their lives, that white people used to routinely refer to them as “niggers.”

2) Those who oppose censoring “nigger” because they fear it will cause white Americans to suddenly forget that their ancestors”and by the immutably transferable rules of universal, intergenerational white guilt, they themselves”always treated blacks as subhumans.

It’s essentially a dispute about the correct way to be politically correct. Both sides are united in scrambling to atone for whites’ perceived collective historical sins. To achieve atonement, one side insists that we protect blacks” self-esteem; the other side insists we must continually insult whites” self-esteem by forcing them to NEVER FORGET what their “people” did to ex-Africans, all those cobwebby years ago.

Repeatedly, I saw commenters reduce all of American history into something “ugly…awful and violent,” lecturing of how “our nation needs an honest conversation on race” because racism “still thrives” and how, thirty-five years after Roots and ten trillion other unbearably cheesy memorials, we still “need to address the atrocities of slavery,” and how”magically”there’s a danger we”d somehow forget about black slavery if we substituted the word “nigger” with, um, “slave.”