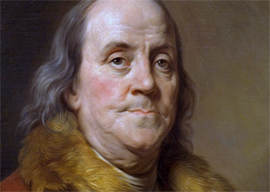 NEW YORK—So I’m standing behind a guy at the drugstore who says, “I’m sorry, I don’t have anything smaller,” and he pulls out a roll of hundreds.

In any other city this would be a drug dealer. But I live a few blocks from Wall Street and I’m looking at his shoes. You can always tell by the shoes. Wall Street guys don’t shop at Payless. They go to some secret shoe store where teams of cobblers use precision hand tools to put those little indentations on the side of the wing-tip and then coat the leather with a shiny lacquer finish normally used on muscle cars from the ’80s. The laces are different too. The laces look like piano wire, like silver garrotes that could be used to strangle International Monetary Fund employees in Venezuela—and probably are.

So, yeah, it was a Wall Street guy, and I’ve been through enough economic cycles for this to make me very, very nervous.

Tonight he’ll be taking those hundred-dollar bills to a strip club—probably Rick’s Cabaret on West 33rd Street—but not before he stops off at some trendy Korean barbecue place that only Morgan Stanley hotshots know about, and then later he’ll find some “intimate” dance club in the East Village where the waitresses in the lounge will be very attentive and one of them will follow him to his Tribeca loft for some 4 a.m. nooky before he orders her an Uber and sends her home to Brooklyn. If she’s really good-looking, he’ll invite her to the fetish party next weekend at a house in the Hamptons, but for now he needs to coke up for the start of the trading day.

“The last time these guys were spotted: 2007. What does that tell you?”

If we had an app that tracked the movements of these guys, all our smartphones would be flashing “DOUCHE ALERT, DOUCHE ALERT” and we would be preparing to take all our money out of Facebook and put it in German treasury bills.

The last time these guys were spotted: 2007. What does that tell you?

I don’t know exactly what’s going on down on Lower Broadway these past few weeks, but I do know that the hundred-dollar bills are out, the elegant older women who sell concierge vacations in the Seychelles are working overtime, and 26-year-old hedge-fund managers who use the word “dude” too much are ordering $80 sushi rolls. This is too much like one of those days in Florida when the beaches are deserted, the sun is unbearably beautiful, the temperature is perfect, and six or seven guys in wetsuits are surfing the symmetrical ten-foot waves—because they ignored the evacuation warning.

Pretty soon now they’ll start talking about “riding the volatility” and “making a market correction.” Next will come “unsophisticated capital flight.” Then, at the moment you would expect all of them to start downsizing their eight-room flats on the 82nd floor of a tower overlooking Central Park and canceling their VIP glamping tent at Burning Man, they’ll all double down. Their companies will purchase pari-mutuel gambling operations at Dubai thoroughbred tracks. Half of them will become film producers. The other half will invest in start-up software designed for the burgeoning pet industry on the Indian subcontinent.

If your “Douche Alert” app is still working by that point, check to see if they’re beating their girlfriends and tell Stacy Keach to get ready for another season of American Greed. Because those fetish parties in the Hamptons never end well.

But here’s the weird thing about this particular cycle. We have a president who is from New York, who would be expected to know Wall Street well, and who keeps saying “4 percent growth, 4 percent growth, I promise 4 percent growth for this economy”—and the deliriously hedonistic partygoers down on Maiden Lane are telling him, “Please, Mr. President, no, don’t do that, please don’t do that, we’re happy, give us our 2 to 3 percent Goldilocks economy instead.”

In other words, these guys who are almost always complaining about government policy are treating Trump like the guy at the frat party who can’t handle his liquor. Somebody tell him to stop ordering cocktails, we’re all gonna throw up.

Meanwhile, unemployment is expected to go as low as 3.5 percent next year—an insane level, meaning virtually everyone who wants a job will have one—and the rising costs of gasoline, groceries, and Hawaiian shirts, thanks to the various trade wars, will be offset by the fact that the guys at Goldman Sachs will still be handing out the hundred-dollar tips. I love a party as much as the next guy, and this one looks to be a blowout not seen since the return of the troops after World War II, but I would feel better if people were saying, “You know, Joe Bob, now that I have a few extra thousand, I think I’m gonna invest in some land in West Texas.”